Senate Majority Leader Harry Reid promises to introduce most of the gun control proposals put forward by President Dead-Eye Obama in the aftermath of the Newtown slaughter. 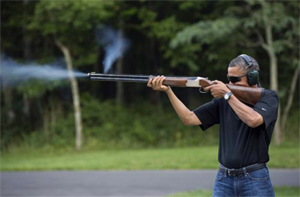 There is a slight distraction. Obamas contention that he shoots skeet all the time while at Camp David has hit a PR bump. The Associated Press reports that the leader of the National Skeet Shooting Assn. says Obama is a lightweight when it comes to the sport.

Hampton rapped the timing of the photo, which was released as the debate over guns heat up.

Meanwhile back in the real world, Slate and Twitter feed @GunDeaths are crowdsourcing an interactive study about how many Americans have died by gun violence since the Dec. 14 slaughter in Connecticut. It finds 1,529 Americans were shot dead from Biddeford (ME) to Key West and San Diego to Marblemount (WA).

The White House was right to publish the photo of Obama shooting skeet. It had to quell the growing social media skepticism about whether Obama ever fired a gun.

Slate and GunDeaths, however, show there is a need to get gun control done. Amateur Hour is over.