Standard & Poor's made a gutsy PR call to announce expected federal fraud charges on Feb. 4, before the Justice Dept. could pull the trigger.

The disclosure, in a lengthy statement by the McGraw-Hill unit (PDF), surprised the media -- "highly unusual" was how McClatchy described it -- and offered a rebuttal and critique of the pending legal action as the rating agency sought to get ahead of the looming story that it acted in bad faith with certain ratings.

"S&P deeply regrets that our CDO ratings failed to fully anticipate the rapidly deteriorating conditions in the U.S. mortgage market during that tumultuous time ... [but] the DOJ would be wrong in contending that S&P ratings were motivated by commercial considerations and not issued in good faith," said the statement. 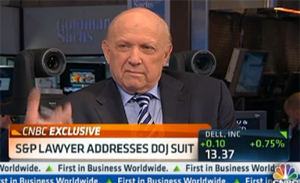 Notably, Catherine Mathis heads corporate communications for S&P. She was previously the top PR exec at the New York Times Co. And it's an analogy to media that S&P and other ratings agencies rely on to protect their work.

S&P, which blessed reams of toxic financial instruments with high marks in the run-up to the financial crisis, has hired PR-savvy First Amendment maven Floyd Abrams as its lead attorney to counter the civil charges of mail, bank and wire fraud filed on Tuesday (copy of complaint). Abrams famously repped the Times in the Pentagon Papers and more recently worked toward the Supreme Court's Citizens United decision that further protected corporate political speech (and helped pave the way to the Super PAC).

Abrams has come out swinging, suggesting on CNBC today that Uncle Sam filed charges because S&P downgraded its credit -- for the first time in history -- after the debt ceiling debacle last year.

Is it true that after the downgrade the intensity of this investigation significantly increased? Yeah, Abrams said. We dont know why.

But the root of S&P's defense is the in hallowed text of the Constitution, specifically the claim, relied on for years, that ratings bestowed by such agencies constitute free speech, like, say, an editorial column.

Constitutional protections of free speech are rooted in areas of public concern -- like journalism and political communications. Many believe the insular world of financial instrument ratings doesn't deserve such protection, especially for those not offered to the public, and the legal tide has pushed against the argument in recent years.

Bloomberg notes that a federal judge in New York brushed aside the free speech defense in a fraud claim against Moody's and S&P that is set for trial this May. The defense was also limited -- twice -- in a billion-dollar negligence suit against the big three agencies brought by pension giant Calpers.

Although the ratings industry lobby was able to fend off a piece of the Dodd-Frank bill that would've prevented the free speech defense by the agencies, the courts may be taking a key defense away from the ratings giants.

S&P, and its brethren Fitch and Moody's, have escaped government culpability to this point for the crisis, despite the Financial Crisis Inquiry Commission naming them as a "key cause" of the meltdown.

Any way you shake it, "fraud" is a tough headline to overcome in PR. S&P's decision to go to the mattresses came after settlement talks fell apart. The government reportedly wanted $1B from the ratings agent, while S&P was thinking more like $100M.

S&P, which couldn't fend off a stock slide with its pre-emptive PR strike, is clearly writing a new playbook.