No, we're not talking about BP this time. Carnival Cruise Lines is the global company facing a steady stream of negative press since its cruise ship Triumph suffered an engine fire Feb. 10 and lost most of its power with 4,200 tweeting, Facebooking and texting passengers on board. 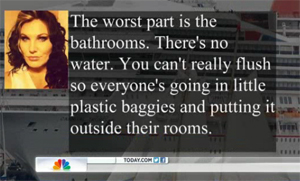 But there was plenty of news for media to run with in the two-day span -- the fire broke out Sunday Morning and the press conference was held Tuesday night -- of silence from Carnival. Passengers on board were more than happy to share their deteriorating experience with the outside world. Word that some were sleeping on deck to avoid the heat and smell inside the ship, and that plastic bags were being used for bathrooms traveled widely.

"Our room is leaking sewage," read one text to ABC News.

Theres no water. You cant really flush so everyones going in little plastic baggies and putting it outside their rooms," another passenger wrote in a text to NBC News.

Theyre vomiting and stuff all over the boat just from the odor. Theres feces all over the floor," said Brent Nutt, whose wife Bethany was on board, on CNN.

Everything that Carnival has told me thus far has not matched up with what my mom has said," the daughter of two passengers onboard said.


Carnival is giving the beleaguered passengers a refund and discount on a future voyage. But the damage to its name -- and possibly across the cruise sector -- can't yet be calculated.

Ernest DelBuono, a former Coast Guard commander now a senior VP with Washington PR firm Levick, told USA Today that Carnival is in a difficult spot. "There are going to be people who will be totally miserable, and you can't make them happy. The bulk of the passengers probably aren't happy  their vacation has been ruined. But they understand what happened, provided they're being communicated with and given food and water. Maybe (management) should break out the band."

In 2010, the Carnival Splendor suffered a similar circumstance which Carnival interactive content supervisor Andrew Elkins subsequently called "by far the worst thing that's ever happened at Carnival." But less than two years later, the Carnival-owned Costa Concordia was among 2012's biggest PR (and operational) disasters. An industry-wide push followed -- Burson-Marsteller and Fleishman-Hillard worked with Costa and Carnival, while APCO advised the cruise ship sector's trade group -- to fix the damage from daily images, beamed globally, of the Concordia ship on its side in shallow water.

"We haven't even thought about the economic impact," CEO Cahill said at Tuesday's press conference. "Our primary focus is getting the guests home safely."

The Triumph is being towed to Mobile, Ala., a PR opportunity for that city's cruise terminal.

It will take some time for the PR baggage to disembark.