Wendell Potter, author of "Deadly Spin," who appeared at the 2009 conference of PR Society of America with Arianna Huffington in a panel on healthcare PR, would be a good speaker at the Real World student career conference of the Societys Georgia chapter this Friday.

Few things are more real in corporate PR than Potter who spent 20 years with CIGNA. His book tells the bad and good of corporate PR but the general drift is negative. He finally quit because he could no longer look at myself in the mirror.

Potter tells of the marketing, legal and other pressures on corporate PR people which is what the 200+ student attendees need to know. One of the panels is on Corporate, agency or non-profit PR?

The conference should at least display copies of his book. 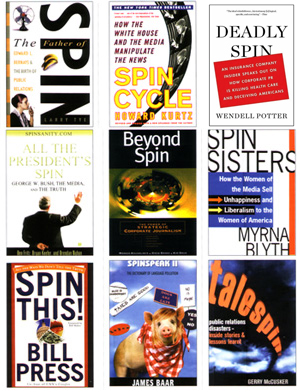 It is one of ten books with Spin in the title which should also be displayed: "Spin!," "Father of Spin," "Spin Cycle," "Beyond Spin," "Spin Sisters," "Spin This," "Spin Speak II," "Talespin" and "All the Presidents Spin."

Pressure to do wrongful or unethical things is common in PR according to expensive research done for the Society from 1999-2002 by the Ethics Resource Center.

The Society paid $50,554 for polling among the 21,192 members who were sent questionnaires with 79 items. In-person interviews were also conducted. Half of the 10% who responded said they feel an extraordinary amount of pressure to compromise their ethical standards. Ninety per cent favored continuance of an enforceable Code.

That advice was rejected by the Society. Prof. Kathy Fitzpatrick of Quinnipiac University, a member of the Ethics Board, wrote 45 pages on why the Society pulled the teeth from the Code, which should be required reading for PR students. The Societys Code says ethical practice is the most important obligation of a member.


Ethics Is Not on Agenda

There is nothing about ethics on the Real World agenda although this is something that normally idealistic students would be concerned with.

There is also nothing about the legalities and ins and outs of internships although national chair Mickey Nall, who will speak at the conference lunch, has said he doesnt even look at resumes with less than two internships.

Internships may be helpful in opening doors but PR recruiters tell us the real way to get a job at a PR firm is to bring in a client.

The nearly endless ways PR people can forage for new clients are covered in "The Army of Entrepreneurs" by New York counselor Jennifer Prosek, who heads Prosek Partners, PR firm with 50+ employees. Agency people are under pressure not only to bring in new accounts but sell more services to current clients. This book gives a detailed look at what agency life will be like.

Students who are attending this meeting should apply strict business considerations. PR people, especially in recent times, are all business.

Its a bad deal for the students from a cost/benefit standpoint. For openers, the program is very thin, touching on only a few of the career topic available bases and providing a platform for Coke and others to burnish their images..

Students, for these minimal offerings, are being asked to pay $80 to the richest of the 110 Society chapters. Cash in a non-interest bearing accounts as of Dec. 31, 2011 was $317,367. The chapter, second largest with 800+ members, is so rich it cant even be bothered to obtain interest on its cash. The $317K is also its net assets because it owes nothing.

Non-profits aim for six months of expenses in the till but Georgias expenses were only $220,907 in 2011. It thus has 18 months of expenses in the till which is way over the top. What doesnt it understand about the word non-profit!? Its supposed to spend its money not only on members but the entire PR industry. Its supposed to earn its tax-free status by public service. Hoarding its money this way threatens its tax status.

Why Georgia is so rich is a question students should explore.

One of the chapter directors is Julie Davis of Georgia-Pacific, a private company with 35,000 employees owned by two of the richest people in the world, David and Charles Koch. Each is worth $31 billion and rank No. 12 on the Forbes billionaires list.

There are numerous stories about the Koch brothers and their political activities including this from the Huffington Post.

None of the contacts listed by phone number at Georgia-Pacific (Greg Guest, Karen Cole and Carol Mitchell) would pick up the phone.

PR dept. heads and even press contacts at blue chips are often hidden. The New York Times Feb. 13 reported a charge by New York City comptroller John Liu that a sweetheart deal with Marriott in 1998 valued the land under the Marriott Marquis hotel at $19.9 million when the real value is far more and could cost the city $344.9M in lost rent and proceeds from sale of the property. Marriott and the city denied the claim but an interesting point to us was that no one at Marriott PR was named, although a spokeswoman for Mayor Bloomberg was (Julie Wood). Readers only learned that Marriott said something.

PR head at Marriott it Kathleen Matthews, former D.C. on-air telecaster and wife of Chris Tell me something I dont know Matthews of MSNBCs Hardball.


Lockheed, Cox on Board

Stephanie Stinn of Lockheed-Martin and Mary Dugenski of Cox Enterprises are also on the Georgia chapter board. Coca-Cola, represented at career day by Kate Hartman who will talk about Coke at the 2012 Olympics in London, has two Assembly delegatesRay Crockett, retired but still associated with Coke, and Kent Landers, group director, corporate media relations.

Landers has opted out of e-mail in his Society member listing. Questions about Cokes intern policies have been left with a PR staffer.

Coke is supposedly a friend of youth but students should read Endless Barrage of Hard Sell in the Feb. 12 New York Times which says Coke and others bombard children with commercials pitching fast foods, sugared cereals, sugary drinks and candy. Coke is said to be the most popular brand on Facebook with 58 million fans.

Children share Coke posts with their friends. Ads try to involve the children and others in games and contests.

The Georgia chapter of PRSA does not make it easy to reach its directors.

Only their names and companies are listed on the chapter website. There are no titles, phone numbers or e-mails.

Reaching any of the board members took some doing. Even if reached, none would comment or get involved in what is going on at the Feb. 22 career day.

The New York chapter officer/board web listings put Georgia to shame. Not only are the phone numbers, employers and titles there for nearly 70 leaders, but also their e-mails and many of their cell phones.

Corporate/institutional gag orders are common and include 45 pages of corporate terrorism by Viacom (as described by the Village Voice) and the Societys own gag order covering officers, directors, members and staff.


We Suspect They Were There!

Since ducking phone calls and e-mails has become national habit, and especially in PR and journalism, we had the suspicion that all three press contacts at Georgia-Pacific were there listening to our messages.

The Jan. 28 New Yorker humorous piece by Colin Jost titled Automatic Reply tells of someone ducking calls and e-mails with all sorts of canned excuses while actually keeping careful track of each one as it arrives.

We believe Jost was describing a PR practitioner.

Just about as hard to reach by phone or e-mail are editors. Students thinking of going into PR should get a taste of the frustrations that await them in communications. Electronic devices have become barriers to communications rather than facilitators of it.


The Irrationality of PR Is an Issue

Students trying to deal with career conference figures Alicia Thompson of Popeyes, chapter president, and Mickey Nall, national chair who will speak at the conference, may run into a wall of irrationality and non-availability.

Students should view the YouTube of noted intellectual Noam Chomsky who says the irrationality of PR and advertising is pervasive in American life and is a threat to democracy.

Questions are below that the students should join us in submitting to Thompson and Nall before the conference, giving them time to come up with answers.

This blog as well as three others and copies of ODwyers Directory of PR Firms and the 12 most recent issues of ODwyers magazine have been sent to PR student chapter advisers and leaders at 11 Georgia institutionsUniversity of Georgia, Georgia State, Berry College, Clark Atlanta, Georgia Southern, Kennesaw State, Savannah State, University of West Georgia, Valdosta State and Georgia College and State University.

Several professors thanked us for the materials and one said she was amazed that such resources exist.

1. Why is the chapter charging students to attend its career day when many of them are already burdened with debt and working as well as going to college and you have more than $300K in cash sitting in a bank?

2. Why have you barred a literature table when directories of PR firms, companies and non-profits are what job and intern-seeking students need? They also need a list of 43 PR recruiters which is available.

3. Your theme is Real World so why arent you displaying books such as Deadly Spin, The Tylenol Mafia, Army of Entrepreneurs, Power House (bio of Bob Gray of D.C.) and Always Live Better Than Your Clients (bio of Ben Sonnenberg) and other books that are rich in details of what actually goes on in PR?

4. Why doesnt the Society allow reporters as members when every press club in the U.S. including the Atlanta Press Club allows PR people to join (as does the International Assn. of Business Communicators, a 14,000-member near duplicate of the Society)?

5. How can you reject the offer of the ODwyer Co. to provide ten sets of 12 magazines, each one of them focusing on specialty such as healthcare or food & beverages, when one of your panels is on PR specialties and food & beverage and healthcare PR are specifically mentioned?