The State Dept.s public diplomacy corps will be glued to the TV on Oscar Night, rooting for the success of The Bushkazi Boys a 29-minute film that is nominated in the short film live action category. 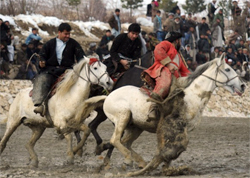 The Wall Street Journal today reported that Bushkazi Boys was funded almost entirely by the State Dept.s $150M propaganda budget to support Afghan media and burnish the U.S. image in Afghanistan. It was shot in Kabul with the help of a dozen aspiring Afghan filmmakers who were paired with professional mentors.

The film revolves around the lives of two young Afghans who dream of starring in Afghanistans national sport. Bushkazi is a rough contest in which horsemen whack a headless calf carcass across a field. The game could run for days. Since the sport is popular across central Asia, the movie may have legs. (Yaks are the preferred riding partners in parts of China.)

The two young stars of Bushkazi Boys will be in Los Angeles during the awards ceremony on Sunday. If they beat out competing films Death of a Shadow, Henry, Curfew and Asad, Bushkazi Boys may be coming to an art house near youthanks to your tax dollars and U.S. propaganda efforts.

I doubt the sport of bushkazi is going to take off here, soccer after all has been trying for years to gain a foothold. The film though may convince some Americans of providing long-term financial and humanitarian assistance to Afghanistan long after the last U.S. soldier has left the country.

To the State Dept., that would be worth more than any Oscar trophy.