The PR Society of America Georgia chapter hosted more than 200 students Feb. 22 at a Real World career day whose program included a presentation by Coca-Cola on what it did at the 2012 Olympics in London, a talk by a PR career specialist on developing personal brands, and a keynote lunch address by PRSA national chair Mickey Nall on how older and younger staffers work together.

The students were charged $80 each to attend, although the chapter has $317,000 in a non-interest bearing account and no payables, making it the richest among the 110 chapters in the Society. [Chapter financial information is available in its 990 tax return via Foundation Center 990 Finder. EIN is 58-6043704.] 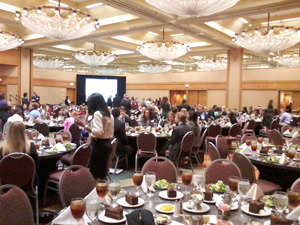 Although reporters were banned from everything but the luncheon address by Mickey Nall of Ogilvy PR, students at the career day provided coverage for this website.

They said Nalls message was that ethics should be the supreme concern of PR people and that making money is not what PR is about.

Every speaker at the day-long program stressed the importance of ethics, students said.

One Nall quote obtained by a student was that PR is not a revenue producing department.

Its possible he meant profit-making. Obtaining an explanation from Nall could be difficult because he has yet to return any e-mails from the ODwyer Co.

Nall, whose topic was how different generations work together, said that the duty of PR people no matter what their ages is to be honest, transparent, authentic. Those are three core values of the PR Society, he said.

Marketing colleagues may own the brand but PR colleagues own the reputation, he said.

PR people should warn their CEOs that a great marketing campaign may not always be great for the companys reputation, said Nall.

A recurring theme among the speakers, according to the student reporters, was that people should go into PR because they love it and not for the money.

Former chapter president Mike Neumeier of Arketi Group said the expected pay-off may not be there.

His advice was: Own it. Love it.

Coke PR senior manager Kate Hartman spoke at length on the companys PR efforts at the 2012 Olympics in London. Two videoclips were shown on Cokes multi-platform campaign to win attention and involvement of teens in the Games.

The budget we have in PR is usually quite a bit less than marketing at Coke, she said. The PR goal was different from the marketing goal yet had to stay on message, she said. Her message was that marketing and PR must all work together to tell one story. PR has to work with marketing because marketing has more money, she added.

Former Coke North and South America president and COO Jeff Dunn is quoted at length in an article about alleged savage marketing practices of Coke and other companies in the Feb. 24 New York Times Magazine.

The article draws from the forthcoming Random House book titled "Salt Sugar Fat: How the Food Giants Hooked Us."

Dunn, with the company 20 years, said he was fired in 2004 because of his quest to steer the company into a more healthful mode which included pulling regular Coke from public schools.

He expresses fear of Coke, saying You really dont want them mad at you. Theyre a very very aggressive company.


Sponsors Need to Look at Program

Besides collecting about $16,000 from the students, the Georgia chapter also took in $12,350 in cash from 24 sponsors plus in kind donations from Popeyes Louisiana Chicken and Arbys Restaurant Group (probably food), Kennesaw State University, Jackson Spalding, Atlanta Convention & Visitors Bureau, Cox Media Group and the Arthritis Foundation.

Top contributors ($1,000) were Kennesaw State University, a 24,000-student facility 20 miles north of Atlanta that offers an MA in Integrated Global Communications; Louisiana Kitchen Popeyes, whose PR is headed by Alicia Thompson, president of the chapter; UPS, and Porter Novelli.

Those brand names, developed over many years via excellent performance and considerable investment in dollars, are not to be thrown around willy-nilly. Their PR executives should take an active role next year in what is on the Georgia chapters career day program.

Our student reporters said there was very little about obtaining internships or jobs and that the talk of ethics being supreme and money being a side issue was discouraging to them. Many of the students are holding down two or more jobs and already in debt. Expensive college is now two 13-week semesters. It used to be closer to 39 weeks of school.

We doubt any of the PR people at these companies were aware that there would be no literature table, although free directories were offered; that reporters would be banned from all the sessions except lunch; that money was being collected from students, many of them in debt, although the chapter has more than 18 months of expenses ($317K) sitting in a non-interest bearing account, and that there were no sessions on the rules for non-paid internships, working under contract, or starting freelance businesses, the likely routes for many grads.

We think the students should all get refunds.

Since the importance of ethics in PR was stressed at all the sessions, that would be the ethical thing to do.

They have been promised a set of notes by all the speakers and we would like to see those.

Although working reporters were banned, some of the students who paid their way sent us reports on what went on during the sessions.

Theres no reason that the whole day should not be on the record and even available via live audio and delayed video as was done for the Investigative Reporters & Editors June 16, 2012. A video of the talk by New York Times executive editor Jill Abramson was available shortly after she gave it in Boston on June 16 (http://tinyurl.com/6sbeqaf) and so were many of the other sessions and panels.

PR people are supposed to be adept at using technology but we find the opposite is going on. Voice mail, e-mail, LinkedIn and other social media are often used to block communications rather than facilitate it.

The Canadian PR Society (www.cprs.ca) audio casts its annual general meeting via the web but the U.S. PR Society has banned reporters from the Assembly for the past two years. Nothing has escaped from the 2012 Assembly including minutes of the meeting. National board member Diane Gage-Lofgren of Kaiser Permanente conducted three hours of discussion in which delegates could raise any topic they wished. She is also on the board of the Societys Foundation which will honor Daniel Edelman at its Paladin dinner April 24.

There was a time when PR people positioned themselves as peacemakers on the competitive battlefield.

But lately they have become full-fledged combatants, using just as much tooth and claws as any businessperson fighting for a share of market.

PR people, as seen in this series on the Atlanta chapter career day, fight in an odd manner--dropping something on the battlefield and departing, never to be seen again. Their main weapons are silence and unavailability.

Thompson received our offer on Jan. 28 of 10 ODwyers Directory of PR Firms and ODwyer magazines on PR specialties by saying she would take it up with the committee a week later. We talked to her once but never again. An e-mail came on Feb. 4 saying the offer had been rejected but next years career day would consider using a wide variety of resource options.

Links to four previous blogs on the Georgia career day are here: