It isnt often that a CEO admits to mistakes, which is why J.C. Penney CEO Ron Johnson earns my Stand-Up Guy of the Month award.

Congratulations, Ron. Accept the kudos while you can. 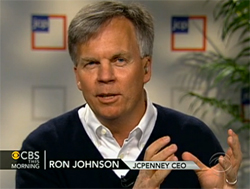 The Plano, Tex.-based department store chains sales had been tanking since 2007, but went into free-fall once Johnson, who was Apples retail genius, put his growth strategy into place on Feb. 1, 2012. Things hit the fan yesterday as Johnson released his report card.

Penney reported a 28.4 percent plunge in Q4 revenues to $3.9B. To compound matters, the just-concluded quarter had an extra week compared to the year ago period. Penneys net loss soared to $552M from $87M during the quarter.

For the year, Johnson mercifully kept Penney under the $1B net loss mark as the companys deficit hit $985M, up from $152M. Full-year sales collapsed 24.8 percent to $13B.

Bernie Sosnick, a Gilford Securities analyst, summed it up nicely, saying Penney chalked up the worst performance that he has seen in decades of covering the retail sector. Theres nothing really to compare it against, he added.

The only good news in Penneys quarterly report: its all over.

Straight-shooter Johnson admitted he flopped. We made some big mistakes and I take personal responsibility for these, he said during the conference call.

His biggest mistake is assuming that he could bring some of the Apple magic to Penney. Consumers run to Apple stores. Most run away from Penney. He also promised to restore coupons that are beloved by Penney's diminishing customer base.

Penneys fiscal 2013 disaster occurred despite a hefty 14 percent boost in ad spending to just over $500M, nearly $375M of that amount went to costly TV ads. Johnson should redeploy a substantial chunk of that outlay to much more cost-effective PR to educate people on the Penney transformation. His time is running out.

Johnson also told analysts that he hired one-time Coca-Cola marketing guru Sergio Zyman as an advisor. Zyman was the genius behind the launch of New Coke. We know how that turned out.

He fits right in at Penney.