All of Wall Street eagerly awaits todays release of Berkshire-Hathaway CEO Warren Buffetts annual letter to shareholders to get a fix on the Oracle of Omahas outlook for the year. 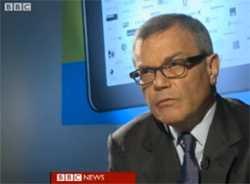 Forget about Buffett, the Oracle of London released his own musings today (PDF).

I feast on the writings of WPP chief Martin Sorrell, who provided his unique take on the world in the ad/PR firms 2012 earnings report. Sorrell never disappoints. Hes good for a creative, informative, funny and sometimes baffling read.

Here is why U.S. multinationals, sitting on a combined $2T cash trove, are so-tightfisted when it comes to spending for communications:


But while clients were certainly in better shape than pre-Lehman in September 2008, they still lacked the necessary confidences given the grey swans, or known unknowns. Black swans are the unknown unknowns which by definition we do not know what they are.

He shares a quote from an investment banker who said companies may be running out of ways of reducing costs and have to focus more on top line growth. Merger and acquisition activity may be another way of doing this, but maybe a more risky way than investing and marketing and brand and hence market share.

Good news for the ad/PR community.

How about a geography lesson? In Sorrells world, the BRICS collection of countries (Brazil, Russia, India and China) is yesterdays news. The chief tells shareholders about the MIST grouping of Mexico, Indonesia, South Korea and Turkey, which was up 11 percent in 2012 to $580M revenues.

Speaking of China, Sorrell believes the west has fundamentally misunderstood the significance of the 12th Five-Year Plan. That plan looks for lower quantum, but higher quality growth at around 7.5 percent compound (which we would kill for), combined with higher consumption, lower savings, a social security safety net and stronger services sector (almost a charter for WPP). The new politburo leadership seems to be another bull market signal.

Thanks for setting us straight.

Sorrell has praise for Super Mario Draghi, president of the ECB, for improving the prospects of the Eurozone and criticism for the U.S. Congress for failing to deal with the $16T federal debt. He faults Congress for kicking the can further down the road and the sequester is ill-equipped to help, having been really devised as a compromise measure in June 2011 never to be used.

Sorrells next update is scheduled for August with the release of WPPs first-half results. Ill be waiting for that installment.