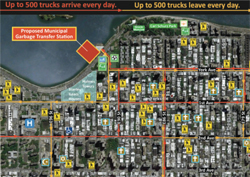 Mayor Bloomberg unveiled his solid waste management plan in 2002, a program that called for an equitable distribution of NYCs garbage. The program calls for transporting NYC garbage via barge or rail thus reducing the number of fume-belching trucks from city streets.

Current waste transfer stations are located in low-income areas of NYCs outer boroughs. Manhattan, which generates 40 percent of the citys residential trash, does not have a working waste station.

DAmatos firm, Park Strategies, is repping Residents for Sane Trash Solutions. Sane claims the cost of the 91 St. facility has ballooned from $55M to $245M and projects an ultimate cost of $400M. It contends Manhattan complies with the NYCs borough equity argument because its trash is trucked to a waste-to-energy plant in New Jersey.

City Council president Christine Quinn, who is the leading contender to succeed Bloomberg, backs the Upper East Side waste station. Last month, she was booed at an Upper East Side community meeting.

DAmato leads the Sane team. He is joined by son, Christopher, and former Congressman Vito Fossella from Staten Island.

S.I. was home to the Fresh Kills Landfill, which once took the bulk of NYCs trash. It was closed in 2001, which triggered the new solid waste management plan. Fresh Kills is in the process of being converted to a park.