Former Tennessee Congressman Bart Gordon is repping Planetary Resources, the Seattle-based company that intends to mine precious metals contained in the 9,000 near-Earth asteroids, a collection the company calls the low hanging fruit of the solar system. 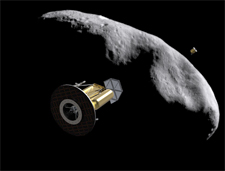 About 1,000 of those NEAs are energetically as easy to reach as the Moon, according to Planetary Resources. There are more than 600K asteroids in the solar system.

Co-founder Peter Diamondis predicts a potential $1T market in asteroid mining and notes that a single 500-meter asteroid may hold more platinum than was ever mined on Earth.

Asteroids have huge reservoirs of water, a resource that could be brought to Earth to bolster its dwindling supply, or used to supply deep-space exploration missions.

Planetary Resources has a deal with Richard Bransons Virgin Galactic and its LauncherOne rocket for a series of launches for its Arkyd space telescopes to identify the most economically promising NEAs.

Those will be targeted for mining missions conducted by robotic spacecraft.
PR retained Gordons firm, K&L Gates, for its Washington representation for asteroid mining. There is no pending legislation concerning mining the asteroids.

Gordon, a Democrat who did not seek re-election in 2010, had chaired the House Committee on Science and Technology.