Ex-journalist Richard Sine has blogged that journalism schools should close down because students might as well study "blacksmithing, bloodletting or steamship design."

Students at the Columbia J-School are paying $70K for "a ghosts chance of landing a job, at pitiful pay, in an industry that is rapidly collapsing," Sine (pictured) laments.

On the PR side, we have Art Stevens, who was almost president of PRSA in 2002, saying that as a delegate to the Assembly Nov. 7 he "witnessed the demise of PRSA and its slow evolution into irrelevancy."

He blasted the "parochialism, narrow mindedness and small thinking" he saw at the Assembly.

Both journalism and "PR" are in a state of collapse.

On the other hand, promotion is flourishing and that is what most surviving PR people are doing these days.

Helping businesses to grow, including the millions of small ones that generate most of the new jobs, is where the action is.

Sine, who was at the Philadelphia Inquirer and now works out of Atlanta, accepted an offer to study business journalism on a fellowship. He found the J-schoolers to be "timid, desultory and aimless," taking up such topics as media history, communications theory or journalism philosophy, which he felt had "no practical career use."

On the B-school side, he found students who were "passionate, driven and excited about their futures."

The "financially illiterate," he feels, go to J-schools which are "built on the backs of starry-eyed naifs."

The same could be said for much of PR education especially at the undergraduate level. What do 18 and 19-year-olds know?

Graduate schools that integrate PR with business are a different story.

Sine felt like "closing down the J-school and sending most of those kids to the shiny new B-School."

Similar criticism of the Columbia J-school was made in the July 1993 New Republic by Michael Lewis, author of "Liar's Poker." The cover story was called "J-school Ate My Brain."

We rail a lot about the stonewalling at the PR Society but it's merely doing what almost corporations and institutions do  limit information flow and press contact as much as possible.

We lay the blame on the lawyers, financial types and marketers who have the biggest voices in institutions.

The PR pros who have arrived in the past 20 years include almost none with journalistic backgrounds. They have no background in the sanctity of information and analysis.

Information flow is choked off to such an extent that it's hard covering some industries.

The five ad/PR conglomerates, for instance, have blocked all revenue and staff information for their thousands of ad agencies and PR firms since 2001. Account and staff news has mostly disappeared. Speeches by their executives are a rarity.

We were interviewed twice for "live streaming" at the PRSA conference in San Diego and created quite a stir by saying PR people should only deal with the press  professionals should deal with professionals.

A hue and cry went up about all the work PR people are doing with social media, employees, stockholders, customers, retirees, etc.

Fine, we said, but the definition of PR is conversation, hashing things over in an informal setting with experts of one sort or another. No huff, puff or fluff, just cold-eyed examination of the factsall the factsthat are on the table.

The original promise of Ivy Lee in 1906 was that his "press bureau" would answer all press questions "most cheerfully."

In today's strictly controlled environment, PR pros jeopardize their careers by meeting with journalists or even talking to them on the phone.

The legal/financial/marketing powers at institutions don't trust their PR people and "squealers" like Wendell Potter, ex-Cigna, who is telling as many secrets as he can about the drug industry, and Scott McClellan, who said he lied in behalf of President Bush, don't help matters.

IBM Is Example of Corp. PR

Corporate PR is as tight as the proverbial drum these days.

An example is IBM. Our experience with IBM in recent days is typical. We call scores of major companies each year on personnel and other changes and the treatment there mirrors what we got at IBM.

We tried to reach Jon Iwata, IBM head of "marketing, communications and citizenship organizations" after he gave an excellent overview of communications to the Institute for PR Nov. 4. We wanted to discuss it with him. For one thing, it never mentioned the words "PR."

The IBM website only lists a phone number for "corporate PR" and the person who answered it said she was an administrative assistant.

We asked to talk to a PR professional. No, was the answer. We were shifted instead to an assistant to Iwata who politely took down our request.

We never heard from Iwata and got the same treatment two years ago when he headed PR Seminar in the year that it decided to remove the "PR" from its name.

What the U.S. is suffering from, besides a trade deficit, is an information deficit.

The root of the current financial collapse is secrecy  including "dubious assets" hidden in off-balance-sheet entries, as pointed out by New York Times columnist Floyd Norris Sept. 11.

He excoriated the entire accounting field in harsh language ("Accountants Misled Us Into Crisis") and said "politics" at the Financial Accounting Standards Board is blocking reforms. Lax oversight not only by the government, which ignored for years complaints about Bernie Madoff, but by Fitch, Moodys and S&P greased the skids of the economic dive.

A highly visible example of massive withholding of information is the PR Society.

This column includes five images of materials in the 2008 IRS Form 990 filing (below), culled from a total of 46 pages.

Assembly delegates should have received this form on Sept. 15 when it was filed. It's still not on the PRSA website nor in the "990 Finder" on the web (although 2007 is).

Readers will see the date of the 990 filing (Sept. 17); the loss of $451,519 in "investments"; the list of 34 stock sales in 2008 when 2010 chair-elect Rosanna Fiske was treasurer; the salaries of six staffers making more than $100K, including a $50K pay raise to COO Bill Murray; suppliers paid more than $100K including D.C. law firm Venable which received $110K, and total fees to consultants, writers speakers.

Information blockage at PRS includes withholding the official list of delegates to the 2009 Assembly from members except the delegates themselves, and failure to audiocast the crucial 2009 Assembly when it would have been easy to do so.

Except at PRS, there's no such thing as legislators whose identity is kept secret from citizens or the general membership of a group.

Chair Mike Cherenson, who told a bylaws teleconference that "live" audio streaming of the Assembly would be "near impossible, technologically challenging," himself took part in a live audiostream Nov. 10 at the conference.

As late as 2002, the Society not only provided audiotapes of the entire Assembly but PDFs of transcripts. 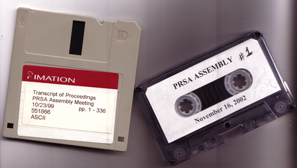 Members are entitled to hear long debates that went on Nov. 7 about PR vs. communications and how members could be disciplined if they broke the Society code.

We were stymied in our coverage of the debates because we have a hearing problem and were not allowed either to sit closer to the front nor don headphones as were used by some of the six audio technicians who were recording the meeting and handling the public address system.

That violated the spirit if not the letter of the 1990 Americans with Disabilities Act. It also violated many parts of the Society Code including the one promising fair dealings with media.

Stevens has complained that the 2009 Assembly made a big mistake by ignoring bylaw committee recommendations including letting non-APRs on the national board.

The committee allowed non-APRs on the board but only if they could show a record of 20 or more years in PR posts with ever higher degrees of responsibilities.

This was no door-opening at all. Anyone with such a record (and we don't think anyone on the current board could qualify) would not show up for the PRS board especially with the new rule that officers have to be directors first.

That just about eliminates any new blood in the officer posts. The founders put in a bylaw that directors were not to succeed themselves and this meant once off the board, always off.

The founders did not want a clique taking over the Society which is just what has happened.
Fiske, 2010 chair-elect, is making her third appearance on the board after having been dropped twice.

The APR clique that has ruled PRS since the 1970s will not allow open elections because any non-APR running for chair would win hands-down since more than 80% of members are non-APR.

The New York chapter, which has been silent all year on the bylaws debacle, not scheduling even one meeting with Cherenson or bylaws chair Dave Rickey, should take up the cause of democracy.

The chapter is silent even though leadership has now decided to have national conferences in Philadelphia twice (2007 and 2013) while the last (and biggest) conference in New York was in 2004.