A 2008 member survey by the PR Society found that members give a very low priority to diversity issues, Lynn Appelbaum, national board liaison to the diversity committee, said in a statement on the PRS website Dec. 23.

Appelbaum, associate professor, advertising and PR program director, City College of New York, said the 73 section members paying the annual fee of $60 was far below the 200 minimum set by the board.

The board concluded that a committee would be more effective at reaching more Society members on multicultural topics than continuing the section, she said.

Moving the focus to a committee allows us to more effectively reach the entire membership, she added. 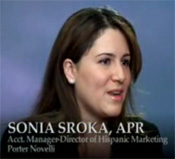 Sharp criticism greeted the end-of-the-year move including a Twitter post by Prof. Richard D. Waters of North Carolina State University that said, Taking voting away from minorities/multicultural members sounds just like the 1800s.

Other Twitter posts, among 20, complained that the Multicultural Section had no chance to defend itselfthe decision was presented to it as a fait accompli just as the PRS h.q. staff was shutting down for 11 days until Jan. 4.

Committees dont have votes in the Assembly, it was also pointed out.

Yann, in another post, said the section had been under a warning for two years.

Estimates are that there only a few dozen African-American and Hispanic PR pros among the Societys 21,000 members.

Veteran members say that with multiculturals making up less than one percent of members, PRS leaders are involved in wishful thinking and false promises when they talk about paying more attention to minorities and other diverse groups.

About 700 black PR pros are members of the National Assn. of Black Journalists, based in Adelphi, Md., which has a total of 4,000 members.

Dues Much Less at BPRS

Dues are far lower than the $225 national dues of PRS and the $65 initiation fee. BPRS groups typically charge no initiation fee. Students are allowed to join while in PRS direct student membership is forbidden. Students can join only if there is an approved chapter of the PR Student Society at the college or university.

Efforts to open PRS to direct student membership, led by Joann Killeen, 2001 national president, and others, have been blocked by members of the Educators Academy who fear increased competition for PR jobs.

Dues of the New York group (www.bprsny.org) are $50 and $25 for students and dues for the other groups are similar.

Also ditched for lack of members was the Corporate Social Responsibility Section while the Travel and Food sections were merged into one.

CSR members are now a Council of Experts without a vote in the Assembly.

Cherensons Dec. 22 State of the Society statement did not mention the dissolution of the Multicultural and Corporate Social Responsibility Sections.

He said, Our industry looks forward to brighter days ahead and, the financial markets today seem poised for a recovery.

PRS is thinking creatively about how to increase its value to members and this has resulted in some new member benefits and the continuation of others, he said. There was no mention of cancellations.

The only time sections were mentioned was his statement that members took advantage of opportunities to build their professional networks by becoming or remaining active in their district, chapter and section communities.

Appelbaum wrote that PRS will be doing a major rewrite of its Strategic Plan in 2010 and that leading this effort will be Fiske, who has long had a passion and provided leadership for diversity in the Society and the profession.

Appelbaum said that the diversity committee will have more influence and access to the Society board and staff and also an expanded mandate that includes the physically challenged.

[Editors note: PRS staff three times refused editor Jack ODwyers request for better seating or other assistance at the conference in San Diego after he said he has a hearing disability. He said he could not hear speakers at the Assembly and the general session featuring Arianna Huffington. Staff refused to allow ODwyer to sit close to the front or to have access to earphones in use by audio technicians at the Assembly. Leaders are refusing to publish a transcript of the Assembly although this had been the practice until 2005].