Since Coca-Cola is hosting a $1,195 three-day "social media" conference for PR people at its h.q. in Atlanta Feb. 22-24, the focus will be on its products and policies as well as social media. 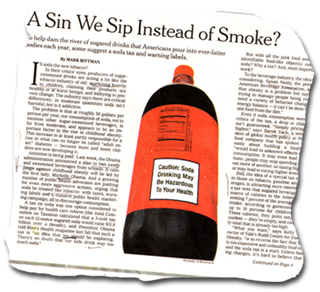 She feels children are special targets of soda giants and wants all sweetened products removed from schools.

President Obama has said that "Kids drink way too much soda." New York State and New York City officials are advocating a tax on sodas. The NYS tax would be a penny-per-ounce and would raise the cost of a 12-pack of Coke from $2.99 to $4.43.

African Americans have a 51% higher rate of obesity and Hispanics, 21% higher, according to the Centers for Disease Control.

The possibility of a soda tax was explored by the Feb. 14 New York Times. It said Americans drink about 50 gallons of soda yearly plus other sweetened beverages (mostly using the cheaper but hard to digest corn syrup). The products of Coke and other soda and fast-food companies are under close examination.

According to the CDC map of obesity, the area around Atlanta is the fattest place in the U.S. CDC says about one-third of adults are obese while other organizations say about two-thirds are "overweight."

Some nutritionists are saying that doctors and drug companies are not doing enough to publicize the dangers of poor eating habits. They are calling for warning signs in doctors offices and medical facilities.

Doctors and drug companies make a lot of money treating heart disease, diabetes and other illnesses that could be made less common through proper dieting, say nutritionists.


The Feb. 22-24 meeting is the annual SM conference of Ragan Communications but top billing is going to Coke and third-place billing to NANA (nee PRSA).

COO Bill Murray of NANA is to speak on the decline of traditional media and the rise of SM.

Coke and other soda companies are pictured by nutritionists as major culprits in the fattening of the U.S. If you listen to what some nutritionists are saying about sodas and particularly their use of high fructose corn syrup, youll never drink another soda.

Coke did not answer our queries about its use of corn syrup and Pepsi referred us to the Beverage Institute.

The soda industry argues that corn sugar is not that much different from real sugar.

Some see the answer in drinking diet soda but theres a school of thought that says that will only make you fatter since you will crave food.

Consumers need to explore this subject via the numerous sources on the internet. They cannot rely on what the soda companies are saying via SM.

Coke and Pepsi currently have major campaigns using traditional and SM to position themselves as model corporate citizens.

Coke also has issues about its policies in Colombia which are under fire and its alleged moves to halt a Canadian TV segment on Coke and Colombia.

In a blockbuster announcement at the end of the first blog of NANA chair Gary McCormick, he says that the next board meeting (after the one on Jan. 28-30 at h.q.) will be July 15-17 in Atlanta.

That report was made one month after the close of the quarter.

The Assn. obviously has the results of Q4 but is withholding them from members. It is living up to its NANA label (National Assn. of Not Availables).

Debra Miller, 1997 president, released the 1996 results in February of 199. No other national leader followed her good example.

This is obviously a cost-cutting move since transporting and lodging 19 people (including the two African-American senior counsels who dont have a vote) would probably be more than $50,000.

But NANA will spend more than $100,000 on the Leadership Rally of 109 presidents-elect of the chapters, the very people that the new bylaws say are to serve as delegates to the Assembly unless otherwise ordered by the chapter.

In a few words, McCormick has admitted that NANA is strapped for cash, that the board is so unimportant it doesnt even have to meet, and that continued stroking and politicizing of the chapter leaders is what is important no matter what the cost.

The Rally, which was born in 1999, borders on the scandalous especially since it replaced the Spring Assembly that helped to govern NANA for its first 40 years.

The presidents-elect each receive $500 in cash to help with the weekend in New York June
4-6 that coincides with the Silver Anvil Awards night June 4.

This weekend no doubt helps chapters to recruit volunteer officers. Supposedly they learn how to run a chapter, attract new members, etc. Cant one chapter leader just pass this onto the next one? What about a booklet or an e-mail? We think politics is what goes on at the rally.

The Assembly has re-named itself the Leadership Assembly but neither McCormick nor any Assembly delegate is pushing for a meeting of the Assembly other than on Oct. 16 in Washington, D.C.

How can a body exert leadership if it meets once a year and about half of its members turn
over each year?

How can the Assn. promote the use of PR (The Business Case for PR) if it doesnt practice PR itself?

NANA, needing money, has put an early deadline on those who want to register for the D.C. conference.

NANA is hopeful of a big attendance for its first annual conference in D.C. since 1986, 24 years ago.

One easy way for NANA to put its books in order would be alternating conferences between New York and D.C. But the provincial interests who control the Assn. would never allow this. They would as soon as give up APR as mandatory for the national board.

A group of lawyers has formed the SCG Legal PR Network to help journalists with thorny legal angles on stories, a much-needed development. (link, sub req'd)

The American Bar Assn. as well as the New York State Bar have long had hotlines for reporters.

But our experience with both is that if questions get too detailed, as is often the case, the advice will be, Hire a lawyer.

A problem with talking to lawyers is that a phone call of a few minutes can result in a bill of hundreds of dollars, even though a minor technical question might be involved.

SCG staffers tell us that some lawyers are trying to switch to value billing when appropriate, meaning a subject of lesser complication or importance might result in a lower bill.

Sources say law firms were hard hit by the recession and especially Wall Street-connected firms and need to reach out to the business community.

Paramjit Mahli, a co-founder of SCG Legal PR Network, has written a three-page set of PR guidelines for lawyers (PDF) that would work well for just about any professional.

Lawyers have to get over their traditional reticence about publicity and learn to get their names in the media, she says. It can take time, she adds, for them to position themselves as experts in a particular area of the law.

At a minimum, she says, all law firms should have an online press room.

Other advice is follow what editors write and send them letters or e-mails.