Courageous Australian PR professor Tony Jaques has outed Johnson & Johnsons spin on its 1982 Tylenol recall, criticizing the company for not immediately switching to tamper-proof tablets and for claiming quick action when it actually took five days to recall the vulnerable capsules.

A casualty of J&Js marketing-oriented tactics is the fabled J&J credo which says the company puts the public first.
Its behavior relative to Tylenol showed that it put profits first, the Jaques paper says (link, PDF).

The paper, carried in the online PR Journal of PRSA hosted by Prof. Don Wright of Boston University (pictured), is a gutsy piece but a lot of hard facts and context are needed to flesh out this tragic story that resulted in the murder of 23-year-old Diane Elsworth in 1986.

J&Js public image is that of a cuddly teddy bear dedicated to helping babies and their mothers.

But the business world knows J&J as a ferocious lion of a competitor whose lust for sales and profits sometimes causes it to cross the ethical line.

While the public thinks of it as a single company, it is made up of more than 230 subsidiaries, most of them purchased. It was 150 companies in 1982.

The Wall Street Journal, looking in 1982 for possible enemies of J&J, noted it was an aggressive, even predatory marketer that frequently used litigation to stymie competitors.

The U.S. Justice Dept. in January accused J&J of paying tens of millions in kickbacks to nursing homes to boost the sales of its drugs.

This is an angle that has particular resonance in the PR community since Denny Griswold, founder of PR News and known as the Queen of PR, was held incommunicado in a Connecticut nursing home for the last five years of her life. Her countless friends were unable to contact her by phone, letters or visits (link, sub req'd).

The motive for Griswolds imprisonment? Leaders of the PR Society were asking her to donate her 85th st. townhouse to the Society for a library and schools were seeking her 50 years of PR memorabilia for their libraries. A niece got wind of this and no one from the PR world was able to contact her until her death five years later in 2001. Not a nickel of Griswolds estate nor any of her papers ever went to anyone in the PR community.

A state ombudsman found Griswold strapped in bed and without her hearing aid.

Treatment of those in senior homes remains an area that needs plenty of investigation.

The PR lesson of Tylenol is that a corporate giant, with the acquiescence of the business and general press and PR academia, was able to stand a set of facts on their head, spinning them like a top. 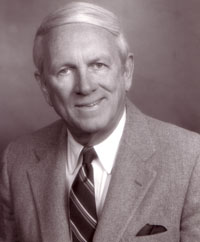 J&Js success in this, described by J&J CEO James Burke and VP-PR Larry Foster (pictured) to the 1983 PR Seminar at the Santa Barbara Biltmore, had a telling impact on the 120 blue chip corporate PR execs at the meeting.

They learned that a company in crisis could get away with having no press conference; could distance itself from a mishap by shifting some attention to a subsidiary (McNeil Laboratories in this case), and could shift attention away from the real problem to a phony one with enough PR and advertising.

The real problem was the easily spiked capsules and not whether they were in tamper-resistant bottles or not.

The PR industry was just recovering from the PR of the 1979 Three Mile Island nuclear accident that was so disastrous that no new nuclear plant was ever ordered after it.

PR executives and the PR Society of America were anxious for a success story and Tylenol seemed to fit the bill, even though a lot of shoehorning would be needed.

Foster and the other PR executives at the at the meeting, believing that more PR for PR was needed than was being done by the PR Society, decided to create a public face for the secretive Seminar. They started the Arthur W. Page Society, dedicated to telling the truth. Seminarians could do PR for the industry without giving up their private four-day wingding each year at a plush resort.

Page was chartered in December 1993. More than half of those on its current 30-member board are also Seminarians including president Bill Margaritis of FedEx; Ray Jordan of J&J Jon Iwata of IBM and Gary Sheffer of General Electric. Twenty-one of the 30 people on the 2009 Seminar board are also members of Page, which has a total of about 360 members, almost all of them in corporate jobs.

Under the influence of PR Seminar/Page, the gap between PR and the press has widened to Grand Canyon proportions.
Secretive Seminar obviously believes that the best press relations is no press relations. Executives and editors of virtually all the major media who attend this annual blast (June 2-5 in Tucson this year) go along with this. None have ever reported even the existence of Seminar.

This no doubt encourages the executives in the belief that major media can be handled. The acceptance of the Tylenol myths by the New York Times, Fortune, Economist, etc. indicates this although the fairy tale of Tylenol may at last be unwinding with the publication of the paper by Jaques.

The power of PR to squelch and twist stories has multiplied in recent years and is one factor in the decline of newspapers and other media.

Regrettably, the PR Society actively preaches avoidance and distrust of the press. Going along with this policy is Gary McCormick, the head of the Society, who works for Scripps Networks Interactive, a spin-off from the E.W. Scripps newspaper empire. No one from SNI, E.W. Scripps or the Scripps Howard Foundation, which is dedicated to the cause of the free press, will say anything. Also silent is the Society of Professional Journalists.

Casualties of the false Tylenol story are the ethics codes of J&J itself, E.W. Scripps, the Scripps Howard Foundation, Page, the PR Society, and the SPJ. These codes and credos have been shown to be not worth the paper theyre written on when the chips are down.

Casualties in this whirlwind of spin are PR students who are paying tens of thousands of dollars yearly to study the subject but are not being told about the powerful forces affecting the dissemination of information.

PR professors we talk to mostly never heard of Seminar and have only the vaguest notion of Page.

Students should know that most of their professors are not only teaching PR but practicing it on the side and may be taking money from the very companies they talk about.

For instance, Leonard Snyder of San Francisco State University, in 1983 wrote an article for the PR Review that criticized the PR of Tylenol.

He faulted J&J for only having a five-member corporate PR dept. and said marketing goals clashed with PR goals. He gave J&J 10 points out of 10 for marketing but only five out of ten for PR.

Foster shot back in a letter to the next PRR that the five-member staff was all that was needed because it had direct access to corporate management. He did not mention that J&J got lots of help in the Tylenol incident from outside counsel Burson-Marsteller.

Snyders motives, said Foster, could be questioned because Snyder pitched J&J to be hired as a consultant to correct our shortcomings. Snyder had enclosed a similar article criticizing J&J that appeared in the International PR Assn. Review in August of 1993).

Said Foster: Other companies that may be solicited in the same way may wish to know that our management considered the article self-serving.

PR profs who practice PR at all are in a conflict of interest similar to the ratings agencies Fitch, Moodys and S&P. Those firms are catching heavy flak now because they gave good ratings to near-junk investments, causing untold harm to the U.S. economy.
The three services were paid handsomely by the very companies whose investments they passed (bad) judgment on.

Students need to buttress their PR texts and classroom lectures with close study of the PR press including the ODwyer website and publications and those of PR Week, Bulldog and PR News.

None of these news media are allowed to advertise to the 21,000 regular members of the PR Society and the 10,000 student members.

The Society treats the PR media as competitors rather than as allies in the quest to promote understanding of the industry.
Not only are students victimized by this narrow policy, but also its members who get a very skewed image of PR.
Wright is a trustee of Page and the Institute for PR.

Such roles make him the most powerful figure in PR education.

We hope he and other PR professors will get together and bring truth and fairness to Page, PR Seminar, PR Society and IPR.
For openers, IPR is not much good to anyone being headquartered at the University of Florida in Gainesville.

It should have its own midtown New York PR library and meeting center or
work with some of the other PR groups to create this.

Its time for leadership in PR. A handful of insiders are the main benefactors of this money at present.