The Village Voice had a good blog piece June 5 about the "intense gag order" that Viacom has slapped on employees. Blogger Joe Coscarelli wrote the new "Business Practices Statement" is "special, secretive and very strict." One out of three isn't that bad. 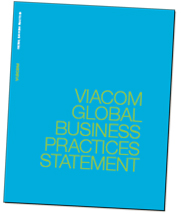 I e-mailed and phoned Carl Folta, Viacoms executive VP-corporate communications, to follow-up on the Voice piece. Jeremy Zweig promptly zipped me an email to say that the Voice ran excerpts from Viacoms Global Business Practices Statement (PDF) that have been in place for some time. The policies in dealing with the press are not unusual, according to Zweig. And they are certainly not "secretive."

The scoop in is plain sight on Viacom's website, though some digging is involved.

While Zweig takes some of air out of the "exclusive" posted by Coscarelli, the blogger did turn a bright light upon the communications policies of the owner of MTV, Comedy Central, Paramount.

Viacom bans all employees  except officially designated spokespeople  from commenting or providing documents or other information to members of the press. That applies to all media contacts whether "on the record," "off the record," unattributed, anonymous or "background" information. Violators are subject to disciplinary action.

A staffer is to run immediately to PR if a journalist does call.

However, the reverse is true. If a staffer picks up some scuttlebutt: "You must also contact your Company's Corporate Communications Department as soon as you become aware of any circumstances involving Viacom that are likely to receive unusual attention from the news media, such as a lawsuit involving Viacom or a controversial programming issue or business decision."

The corporate PR department must authorize interviews, speeches, and presentations. Happy talk is the order of the day.

Viacom has a "non-disparagement" clause that says: "You may not criticize, ridicule, or make any negiative or derogatory statement concerning Viacom to any author, producer or similar person or entity or to any customer, client or supplier of Viacom."

It's not clear whether Viacom jewels Jon Stewart and Stephen Colbert would get bounced if they start trashing Viacom or its CEO Sumner Redstone, a man frequently on the gossip pages.