Digital ad spending will eclipse traditional ad buys in the U.S. for the first time this year, according to the latest ad spending forecast by digital market research company eMarketer.

Digital ad spending in the U.S. will surge by 19 percent in 2019 to total more than $129 billion, according to eMarketer’s report, accounting for an estimated 54.2 percent of the total U.S. advertising market. Those estimates include ads appearing on desktop and laptop computers, as well as mobile phones and other web-connected devices.

Given the latest estimates, eMarketer now predicts that digital will outpace two-thirds of all media spending within the next five years.

Behind this historic milestone is continued growth in the mobile ad market, which is expected to account for more than $87 billion this year, or more than two-thirds of all digital ad spending. 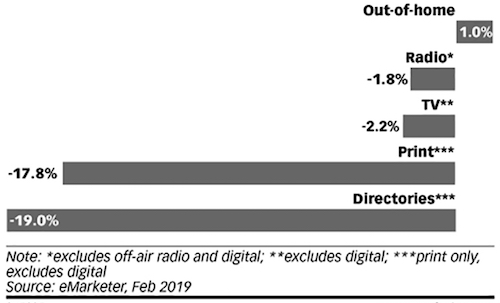 Meanwhile, the report paints a dire picture for the current state of traditional media. eMarketer expects that radio advertising will dip 1.8 percent this year and estimates that TV ads will decline by 2.2 percent, though the upcoming 2020 presidential election is expected to temporarily cause a resurgence of growth in this market next year. Print is expected to continue its free fall, dropping an estimated 17.8 percent in 2019. eMarketer predicts that the biggest hit will affect the directory market—such as ads in the Yellow Pages—which will plummet 19 percent.

The only bright spot for the traditional media world this year comes from the out-of-home advertising market, or advertising that reaches consumers in public places. Bucking the downturn, the out-of-home market is expected to grow by an estimated one percent in 2019.

eMarketer’s latest forecast also predicts that Google and Facebook, longtime ranked the largest holders of the U.S. digital ad share, will see their shares slide this year even as their revenues grow. Top-ranked ad giant Google is expected to lose about one percent of its share and number-two Facebook is expected to lose about .6 percent, accounting for 37.2 percent and 22.1 percent of the U.S. digital ad market, respectively.

While retaining their dominance, eMarketer predicts that third-place Amazon will continue to siphon more shares of the U.S. digital ad market from Google and Facebook this year, growing about two percent to account for 8.8 percent of the total digital ad market in 2019.

Microsoft and Verizon will take the fourth- and fifth-place spots, respectively.