The incendiary words of the National Rifle Association never cease to amaze. This is the organization that represents the country’s gun industry, and its board of directors and staff seem always on the offensive when it comes to a reasonable dialogue about sensible regulations for the most lethal consumer product manufactured in this country.

The NRA’s March issue of “American Rifleman” magazine took the organization’s offensive to another level, however, when it published a picture of House Speaker Nancy Pelosi and former Arizona Congresswoman Gabby Gifford at a news conference. The headline was unambiguous: “Target Practice.”

In the age of Trump, this kind of propaganda is worse than irresponsible. It’s an open invitation to some unhinged gun nut to take action; to put on his camo, lock, load and go after political leaders legislating things like universal background checks at the behest of those who elected them.

The familiar visage of Giffords standing behind Pelosi was no editorial accident, either. In 2011, a crackpot named Jared Lee Loughner shot Giffords in the head, killed six others and wounded 18. Loughner, who had a history of mental health and drug and alcohol abuse, legally purchased a Glock pistol and 33-round magazine. Would a background check have prevented him from buying the gun? We’ll never know. 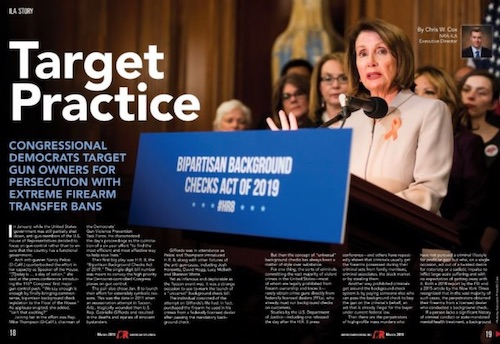 After personally experiencing the horror of that mass shooting, Giffords recovered and, along with her husband, former astronaut Mark Kelly, has become a passionate and outspoken advocate for sensible gun safety laws, which is why the NRA editors made sure she was in the picture.

Their message could not have been clearer: Mess with us, sister, and you might just get a bullet in the brain.

Of course, the magazine attempted to massage that message with a sub-head that read, “Congressional Democrats target gun owners for persecution with extreme firearms transfer bans.” Oh, I get it now. It’s not target practice on politicians. It’s target practice on—no, wait, the “persecution” of—gun owners.

The article under the picture was written by somebody named Chris Cox, an NRA executive director. It criticized H.R. 8, the “Bipartisan Background Checks Act of 2019,” introduced Jan. 8, the anniversary of the mass shooting that wounded Giffords.

Let’s be clear. The only thing Cox cares about is selling as many guns and as much ammo as possible. Anything that gets in the way is to be attacked, vilified, and slandered. As a public relations professional who has studied the NRA’s communication tactics, the organization does this by portraying gun owners as victims of government oppression. The subtext is, “they” want to disarm you so you won’t be able to fight back.

This is nonsense, of course. There are more than 300 million guns in the hands of American citizens. I’d love to know how anyone would go about confiscating all those arms.

The NRA would like you to believe universal background checks are unpopular. In fact, in the wake of the horrific Parkland, Florida mass shooting one year ago, a Quinnipiac University poll found that 97 percent of respondents, including gun owners, supported background checks.

At a 2007 concert, NRA national board member, rocker Ted Nugent, called presidential candidate Barack Obama “a piece of s---,” and “I told him to suck on my machine gun."

He went on to call Hillary Clinton a “worthless bitch,” Democratic Sen. Dianne Feinstein a “worthless whore,” and demanded jail for anyone who utters the words “gun control.”

Cox’s recent article may be somewhat more nuanced, but many of its readers will undoubtedly pick up what he’s putting down.

As reported in Newsweek last Saturday, “Pelosi, meanwhile, has faced numerous threats, including one earlier this month from Christopher Paul Hasson, a self-proclaimed ‘white nationalist’ who federal prosecutors say was plotting an attack on Democratic lawmakers. He was arrested earlier this month in Maryland, where investigators claim he had been stockpiling firearms to use in the alleged attack.”

How many other Hassons are out there? And which ones will read Cox’s article and the headline over it, contemplate that photo of Pelosi and Giffords, and feel encouraged to act?

"The NRA should face legal consequences," tweeted California Democratic Rep. Eric Swalwell. "But let’s put them out of business with boycotts and ballot boxes. #EnoughIsEnough."

Fred Guttenberg, whose daughter Jaime was murdered in the Parkland massacre, said the picture and article "reinforces the notion that (the NRA is) a terror group."