Avoiding the pitfalls of a dysfunctional corporate culture is becoming an increasingly important issue in the boardrooms of companies around the world, according to a new report conducted by Marsh & McLennan Companies with input from WomenCorporateDirectors.

“A dysfunctional or toxic culture creates inefficiencies and daily instances of underperformance across the organization,” said WomenCorporateDirectors CEO Susan Keating. It also leaves many employees looking for a way out. For example, the report says that 80 percent of women who report sexual harassment change jobs within two years.

That can have a serious effect on an organization’s bottom line. Citing numbers from human resources firm Mercer, the study notes that 43 percent of M&MC transactions worldwide experienced serious cultural misalignment that caused deals to be delayed or terminated or purchase prices to be negatively impacted.

Because of this, boards are being pressed to focus more of their attention on culture-related issues. MMC interviewed corporate directors to find out what they saw as the signs that a company may be developing a toxic culture. It also asked them for some pointers about how organizations can take action to rectify any problems.

The first danger sign is not having a clear organizational vision or set of values. Several other top indicators also address executive leadership. “Fighting amongst leadership” was cited, as was “debate and challenge are not encouraged” and “all information runs through the CEO.”

A lack of openness was behind several other warning flags as well. Limited transparency into both organizational decision-making and factors for promotion and success were mentioned. “Bad news is not shared and employees do not feel comfortable reporting incidents” was also on the list. 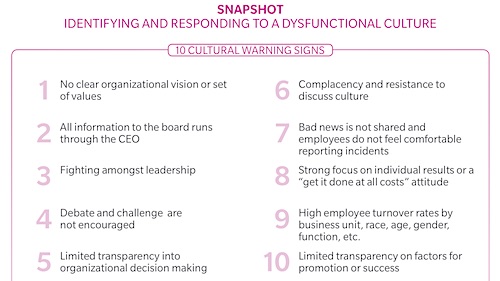 To take action against these problems, the survey respondents made several suggestions. Making sure that cultural issues were a major consideration in the selection of a CEO was one, as was ensuring that culture was a regularly scheduled board agenda item. As regards pay-related issues, they suggested considering how culture-related elements are factors in the organization’s executive compensation.

Respondents also stressed the importance of board members making the effort to communicate outside the boardroom. “Build relationships beyond the C-suite” and “visit sites to better understand day-to-day operations” were listed as priorities. Also, keeping in touch with the organization’s external reputation through channels such as social media was recommended.

“These warning signs provide a starting point for discussion,” said WCD lead director Kapila Anand. “What is built coming out of this can make the organization more resilient, more innovative, and more attractive to the talent you want to keep and recruit.”

To read all of “Identifying and Responding to a Dysfunctional Corporate Culture,” click here.