PR teams are wasting a surprising amount of time on a rather simple chore: manual data entry.

According to the “The State of PR 2019,” a new report from journalist database, media monitoring and coverage reporting platform Muck Rack, 36 percent of PR professionals at agencies are spending as much as 10 hours a week (or 21 days per year) on inputting information.

For an agency with over 100 PR pros on staff, that racks up to a surprising 2,100 days of employee effort annually.

Rather than devoting so much time to manual tasks, the study says, PR pros would be better off working to generate coverage and showcase their success.

Muck Rack’s study surveyed over 800 PR professionals—from coordinators at boutique agencies to chief communications officers at global brands—on topics that include which software and tools they use, their preferred methods for contacting journalists, how they allocate time and money, and what they see as the biggest problems facing the PR industry. 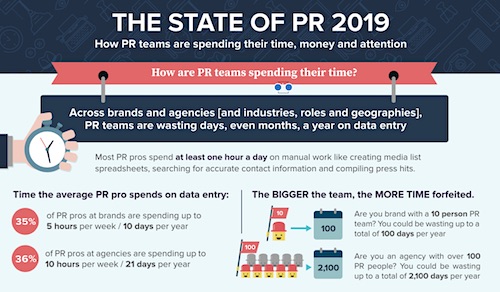 Email remains the top software tool, with 98 percent of respondents saying that they use it on a daily basis. A sizeable majority also cited documents (87 percent) and media databases (69 percent) as central features of their productivity tool kits. In addition, about a third of respondents employ social media, web analytics and/or email marketing software daily.

Only 10 percent, however, make use of a customer relationship management system such as Salesforce or Zendesk. The study authors note that in most cases not using a CRM results in static media lists.

Email also comes out as the top method for contacting journalists, with 97 percent of respondents saying that individual one-to-one emails are a preferred way to reach out to reporters. Contact by phone (41 percent) was the next most cited method, with Twitter (29 percent, mass email (21 percent), newswires (11 percent) and LinkedIn (10 percent) following behind. Facebook came in last, with only 3 percent calling it an effective way to contact journalists.

When it comes to the qualities that make a good pitch, personalization takes the top spot, with 43 percent of respondents citing it as important. The study also notes that journalists say lack of personalization is the #1 reason why they reject otherwise relevant pitches. Other important features include a subject to the journalist (cited by 34 percent) and timeliness (13 percent).

Tightening PR budgets were an issue across the board, with 61 percent of respondents noting their concern on that topic. Even so, a quarter of respondents (25 percent) expect their company’s PR budget to go up this year, while another 38 percent predict no change, and just 11 percent say they think there will be a decrease.

Budget considerations were not at the top of the list of challenges facing the industry. Difficulty measuring business impact (72 percent) took the title in that category, followed by lack of quantifiable measurement (65 percent) and finding and engaging with relevant journalists (61 percent).

To have a look at the entire report, click here.