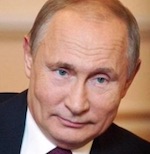 President Trump today boasted of his "terrific" meeting with Vladimir Putin at the G20 Summit in Osaka, Japan, a day after the Russian leader attacked "liberalism," which is the foundation of western democracies, as "obsolete."

The liberal idea has "outlived its purpose," Putin said in an exclusive interview with the Financial Times, taking issue with social tolerance, multiculturalism, freedom of expression and immigration.

A grinning Trump, prompted by the media at the press conference, told Putin to "stop meddling in our elections."

There are leaders who rose to take issue with Putin's attack on the west.

Donald Tusk, president of the European Council, issued a statement: "I was able to read the whole interview with president Putin in the Financial Times. I have to say that I strongly disagree with the main argument that liberalism is obsolete. We are here as Europeans to firmly and unequivocally defend and promote liberal democracy."

The former prime minister of Poland said, "What is really obsolete is authoritarianism, personality cults and the rule of oligarchs."

Theresa May, outgoing UK prime minister, said her country "would continue to unequivocally defend liberal democracy and promote the human rights and equality of all groups, including LGBT people.

Boris Johnson, front-runner to succeed May, chimed in that Putin is "totally wrong…our values, freedom and democracy, the rule of law, free speech, these things are imperishable and they will succeed."

In the FT interview, Putin referred to the US president as "Donald" and called him "talented."

Trump called it a "great honor" to meet the Russian president, and the duo briefly talked about their dislike on the news media. "Fake news, is a great term, isn't it," said Trump.

It's too bad Trump's toadying up to the Russian strongman wasn't fake news.