Freedom House, which has been warning about the erosion of democracy overseas since 1941, has issued a report outlining some of the danger signs developing here that are undermining the “pillars of freedom” in the US.

"Political polarization, declining economic mobility, the outsized influence of special interests, and the diminished influence of fact-based reporting in favor of bellicose partisan media were all problems” in the US before 2017, says the FF report called “Democracy in Retreat: Freedom in the World 2019."

However, FF believes there's little question that president Trump is straining America's core values and testing the stability of the country's constitutional system. 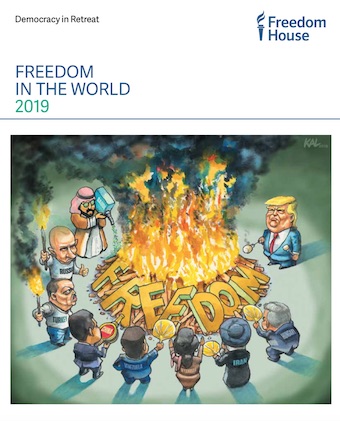 Here are key excerpts from the report:

"Trump has assailed essential institutions and traditions including the separation of powers, a free press, an independent judiciary, the impartial delivery of justice, safeguards against corruption, and most disturbingly, the legitimacy of elections. Congress, a coequal branch of government, has too frequently failed to push back against these attacks with meaningful oversight and other defenses."

While past presidents have criticized the press, Trump stands alone for his “relentless hostility for the institution, itself.”

The president “deployed slurs like 'enemy of the people,' flirted with the idea that the media are responsible for and perhaps deserving of violence, and defended his own routine falsehoods while accusing journalists of lying with malicious, even treasonous intent."

“An independent, pluralistic, and vigilant press corps often antagonizes the subjects it covers. That is an acceptable consequence of the essential service it provides—keeping our democratic system honest, transparent, and accountable to the people. The press exposes private and public-sector corruption, abuses of power, invasions of privacy, and threats to public health and safety.

"Attempts by our leaders to disrupt this process through smears and intimidation could leave all Americans, the president’s supporters and detractors alike, more vulnerable to exploitation, perfidy, and physical hazard.”

The US has a well-established and resilient democracy though FF calls the pressure on the American system as serious as any experienced in living memory.

“The judiciary has repeatedly checked the power of the president, and the press has exposed his actions to public scrutiny. Protests and other forms of civic mobilization against administration policies are large and robust. More people turned out for the midterm elections than in previous years, and there is a growing awareness of the threat that authoritarian practices pose to Americans.

“We cannot take for granted that institutional bulwarks against abuse of power will retain their strength, or that our democracy will endure perpetually.

“Rarely has the need to defend its rules and norms been more urgent. Congress must perform more scrupulous oversight of the administration than it has to date. The courts must continue to resist pressures on their independence. The media must maintain their vigorous reporting even as they defend their constitutional prerogatives. And citizens, including Americans who are typically reluctant to engage in the public square, must be alert to new infringements on their rights and the rule of law, and demand that their elected representatives protect democratic values at home and abroad."

Freedom House promises to watch and speak out in defense of US democracy. "When leaders like Mohammed bin Salman or Victor Orbán take actions that threaten human liberty, it is our mission to document their abuses and condemn them. We must do no less when the threats come from closer to home.”