PR Society of America has posted on its website a plea for help from the "public" in its quest to put new life into its Accreditation program which will be 50 years old next year.

A posting by VP-PR Stephanie Cegielski says the boards of the Society and Universal Accreditation Board and the Society’s staff have reviewed the findings of consultant Laura Freebairn-Smith and are making them "available to the public."

The purpose is to "engage those in the profession and garner additional thoughts and ideas surrounding the future of the APR credential."

Members of the public and "the PR community" are invited to view 51 slides that present the findings of Freebairn-Smith and e-mail their opinions to [email protected] by Nov. 22.

The Society used crowd-sourcing in 2012 when it invited members of 13 PR organizations to help it craft a definition of PR that would be widely accepted. Rosanna Fiske, 2011 chair, kicked off the drive via Stuart Elliott’s column in the Nov. 20, 2011 New York Times.

Many hundreds of suggestions were supplied well into 2012.

Dave Rickey, chair of the PR definition task force, posted on spinsucks.com Feb. 20, 2012 that the quest touched off much criticism of the Society and concluded that PR people should continue to keep the topic open.

One problem with "PR," he said, is that only about 15% of the leaders of the Society have PR in their titles or in their company names.

APR Not Helpful in Job Market

One of the Freebairn-Smith findings is that "Employers are not using APR as a hiring guide."

Sixty-three percent of the 750 respondents said APR is used "not at all" as a hiring guide while 17% said it is only used to a slight extent (slide 12).

A study published by the College of Fellows in 1999 had found that APR had minimal impact on 16 PR recruiters.

The Freebairn-Smith study said one problem is that the UAB is not an "independent" body. A majority of the board are members of the PR Society.

Another finding is that "monitoring and enforcement of ethical standards are weak" (slide 32).

Lacking is an analysis of the costs of APR. The program lost $2.9 million from 1986 to 2002 but costs have been trimmed in recent years. A big expense, costing nearly $200,000 in some years, was having a consultant grade the APR exam which involved more than five hours of writing. A multiple choice test has been used since July 1, 2003.

Participation in the past ten years is less than half of what it was in the previous ten years. The UAB, despite numerous requests by this website, has refused to publish the statistics for the first ten years of the test. Chair is Susan Barnes of Belmont University and Bey-Ling Sha of San Diego State University is vice-chair.

Closing APR Not an Option

While public input is sought on APR and Freebairn-Smith was originally told she was to have "no reservations" in making her recommendations, and that the charge to her was "open-ended," the Cegielski letter quotes chair Mickey Nall of Ogilvy PR as saying that "abandoning Accreditation is not an option."

Those polled were not given the chance to say they favored dropping APR although votes were taken on other questions.

Slide No. 47 shows roads going in several different directions and quotes Yogi Berra as saying, "When you come to a fork in the road, take it." The slide is titled, "So…where do we go?"

Other criticisms of Freebairn-Smith are that the "maintenance requirements for APR are not stringent enough"; that other organizations do not have anything like the "Readiness Review" that the UAB conducts before candidates are allowed to take the test; "the UAB website is dated and does not convey an image of a robust, successful credential"; "the APR’s disciplinary policy does not address concerns of ethical violations," and the Society should note that "30% of certifying programs [have been] discontinued or [are] being considered for discontinuation."

Attempts by the O’Dwyer Co. to provide materials on APR dating back to its inception in 1964 were mostly rebuffed by Freebairn-Lewis. 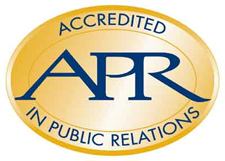 After several articles were sent to her, she e-mailed back that contact with her should be confined to once a week.

Although her office is only about two hours from the O’Dwyer Co., she could not find the time to visit the office over the past nearly five months.

Among flaws in the presentation about APR, a program that has blocked more than 80% of members from running for national office since the mid-1970s, is that while public input is being sought via e-mails, there was no chance for the press or public to question Freebairn-Smith or Society leaders or staff.

A press conference should have been held in New York where at least five PR and ad trade publications are based. NYT ad columnist Stuart Elliott, who has written recently about new image campaigns for FleishmanHillard and Burson-Marsteller, would no doubt have attended.

Also, why is Cegielski making this announcement about the APR study?

It should have come from COO Bill Murray who almost certainly will be named CEO at the Assembly Oct. 26 in Philadelphia.

He should have been available for questioning as well as chair Mickey Nall of Ogilvy PR and Joe Cohen of MWW Group, who is based in New York.

Murray, Nall and Cohen are hiding behind Cegielski, a role for Society leaders performed by her predecessors. At least eight of them wised up after a while and quit.

The last press conference conducted by the Society board was in 1993 at the annual conference in Orlando. Failure of leaders and staff to present themselves to the public (while at the same time asking for help from the public) undercuts the credibility of the Society and its APR program. Consistency is lacking.

Freebairn-Smith did not address the undemocratic nature of the Society which has been in the tight grip of the small faction of APRs for nearly four decades. The 2013 nominating committee included 16 APRs and three non-APRs when the ratios should have been the opposite to reflect the APR portion of the membership.

Also not addressed is the lack of any "live" writing at any point in the APR process. Candidates submit programs that they say they worked on.

Although PR people are usually tasked with media relations, materials for the APR exam say that only 5% of the questions are on media.