The fact that Lady Gaga is on the front cover of the 12th edition of The Practice of Public Relations by Fraser Seitel tells a lot about how marketing PR is practiced these days—hitch your wagon to a celeb.

Newspapers have been hit hard and mags such as Newsweek and US News & World Report have bit the dust. Even Forbes is for sale. But celeb mags such as Entertainment Weekly, Us Weekly and Star are booming. 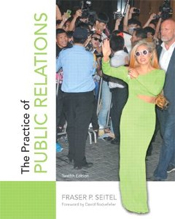 Gaga is a mega-star (60+ million Facebook fans and 40+ million Twitter followers), but so are Beyonce, Rihanna, Miley Cyrus, Justin Bieber, Usher, Jay Z and Kanye West (not to mention the Kardashians).

The Nov. 26 New York mag says country star Taylor Swift is bigger than them all, the “Reigning Queen of Pop.”

Celebrity Leverage, by West Hollywood publicist Jordan McAuley, described the celebrity mania that has gripped the country. Many PR and ad campaigns are based on celebrity tie-ins.

He described the numerous ways in which celebrities can be used including without their knowledge or permission.

Safety expert Debra Holtzman saw a photo of Britney Spears driving her convertible with eight-month-old son Sean Preston in the back sitting in a seat facing forward, a dangerous position. She lectured Spears on her blog and won top media coverage.

Some celebrities, when between jobs, rent themselves out for commercial purposes at costs ranging from a few thousand to $100,000+.

Celebrity Leverage is one of ten books on PR that students should read in addition to the Seitel textbook. They are part of the O’Dwyer PR Library of more than 700 volumes.

The international edition of Seitel’s book has an abstract cover rather than the photo of Lady Gaga.

Seitel and publisher Pearson have put out a 414-page PR textbook that is as current as any publication can be that has a lead time of nearly two years.

Seitel’s opinions on major PR dust-ups since the book went to press are available to students and others on this website. He has written a twice-monthly column for the site for ten years.

In the textbook, there is a new 27-page chapter on social media that covers just about every facet of what Seitel feels will be a “lasting” phenomenon.

He identifies the four primary social media as Facebook, Twitter, LinkedIn and YouTube and tells PR practitioners how to use them. He explores the pros and cons of dealing with bloggers and the “new journalists” who populate the internet.

Seitel likes the 2012 definition that PR Society of America came up with after a global crowd-sourcing effort touched off by 2011 Society chair Rosanna Fiske: “PR is a strategic communication process that builds mutually beneficial relationships between organizations and their publics.”

His own definition is: “PR is a planned process to influence public opinion, through sound character and proper performance, based on mutually satisfactory two-way communication.”

“Character,” “ethics” and “performance” are important to PR practice, he says.

PR people must “always tell the truth” but they don’t have to divulge “everything,” he writes.

Our view is that they should. PR marshals a set of facts that supports a certain agenda, often leaving out major aspects. That is not only wrong but increasingly hard to do in this Age of Information. People can find out almost anything instantly via the internet and don’t like important facts being withheld.

The “definition” of PR that we like was provided by Burson-Marsteller founder Harold Burson on receiving the 2012 Paladin Award of the Foundation of the PR Society.

Burson Said What PR Must Do

He actually sidestepped the definition and instead described what PR people should be doing. Listening is their first duty, he said. Next is serving as the “corporate conscience,” telling employers and clients what is right and wrong.

Then they must then act as “ombudsmen” in support of what the public and press want. Finally, they must communicate with audiences—answer their questions.

Our experience with corporate and institutional PR is that the PR function has been almost squashed out of existence by legal, financial and marketing considerations. Those three functions are super loyal to management and regard outward-focusing PR almost as traitorous.

PR students should study the four-page essay titled “PR Is Dead” authored by the Centre for Corporate Public Affairs, Melbourne. The study refers to corporate/institutional PR.

Almost all “PR” in terms of dealing with media has been off-loaded by institutions to PR firms which have been growing in revenues for many years while corporate PR units have downsized. This growth is documented in the O’Dwyer PR firm rankings.

Seitel asked management guru Peter Drucker for his opinion of “today’s PR practice” and was told: “There is no public relations. There’s publicity, promotion, advertising; but ‘relations’ by definition is a two-way street. And the more important job and the more difficult is not to bring the business and the executives to the outside but to bring the outside to these terribly insulated people.”

Students should also view the Jan. 13, 2013 Al Jazeera videotape of leading intellectual Noam Chomsky who says PR and advertising are “irrational” and a threat to democracy. Students will probably report to marketing in their first jobs.

Tylenol Cases Tell Much about PR

“Arguably, the two most important cases in the history of the practice of PR occurred within four years of each other to the same product and company,” writes Seitel, identifying them as the 1982 murders of seven people by poisoned Tylenol Extra Strength capsules and a similar murder of Diane Elsroth, 23, of Peekskill, N.Y., on Feb. 8, 1986.

We agree that the two incidents changed the face of PR, although our take is different from Seitel’s.

The murders of seven people in Chicago suburbs were discovered on Thursday, Sept. 30, and Friday, Oct. 1, 1982. Names of the victims are not provided in Seitel’s book. Elsroth also died of cyanide placed in a Tylenol capsule.

CEO James Burke, Seitel writes, said he was “heartsick” that another murder had been committed using Tylenol capsules.

Seitel feels that J&J’s actions in the wake of the murders convinced the public that J&J was not at fault.

However, he poses this question to students at the end of the chapter: “Do you think the company made a wise decision by reintroducing Extra-Strength Tylenol?” He means re-introducing Tylenol in capsules that were susceptible to spiking.

J&J, which did not have a press conference after the first murders, staged one on Nov. 11, 1982 to introduce the “tamper-resistant” packaging for Tylenol capsules.

We don’t think students can answer “yes” to the above question. “Tamper-resistant” is a far cry from “tamper-proof” which J&J never claimed. It took another death for J&J to stop selling capsules over-the-counter.

J&J’s massive campaign, swallowed whole by virtually all media and especially business media, showed the power of PR. Following Tylenol, press conferences about disappeared from the business landscape. J&J handled all press inquiries in 1982 one-on-one and in private.

Close to the two Tylenol incidents in influencing modern PR, in our view, was the PR fiasco surrounding the nuclear accident at Three Mile Island, Pa., in 1979, which “crystallized concerns over nuclear safety,” according to Wikipedia. It is not mentioned in the current Seitel textbook.

The partial meltdown of the reactor released negligible amounts of radiation but officials spent the first few days trying to minimize what happened. It was the worst ever accident involving a U.S. commercial nuclear power plant.

Hundreds of reporters descended on the scene, interviewing everyone in sight and trading impressions and tips.

Metropolitan Edison tried its best to handle what resembled an unruly mob. At one point, PR people involved in dealing with the voracious press had a strategy session in a motel room that resulted in a proposal to set up a “hot line” but not answer any calls. Reporters were in the next room listening through the wall about this and other techniques for handling them.

J&J, no doubt did not want to repeat the experience of Met Ed in handling reporters in the open who might probe all sorts of areas such as how many hands did the ingredients of Tylenol pass through on the way to stores and whether J&J had many “enemies.”

The Tylenol Mafia, by ex-J&J employee Scott Bartz, says these are some of the many subjects that would have been brought up in open press questioning.

J&J opted to handle all press inquiries privately. Press conferences have about disappeared from the business world and they are also few and far between in government circles. President Obama has been criticized for holding so few conferences.