Alex Rodriguez is the saddest $275-millionaire in the history of the world.

Last week, after a year of furious pushback against Major League Baseball the player’s union, and his own team, the New York Yankees, A-Rod quietly – and sadly – dropped his lawsuits and accepted his punishment of missing the 2014 baseball season because of taking banned performance-enhancing drugs. 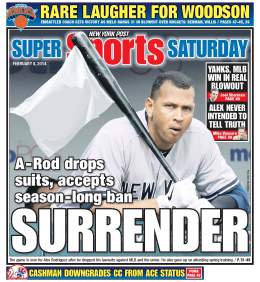 A-Rod’s capitulation was a complete and utter defeat for himself and his high-powered team of legal and public relations consultants.

It is unclear that when Rodriguez, at 39, is eligible to return to baseball the Yankees will be willing to take him back. Nor is it clear what A-Rod, having been racked by injuries, will have left as a ballplayer.  Nor is it certain that if and when A-Rod returns, whether baseball fans – a good portion of whom never liked Rodriguez anyway and now abhor him – will accept him.

One thing, however, in the sad story of Rodriguez is clear: By choosing to take guidance from a publicity-hungry attorney rather than seeking out sound public relations advice, Rodriguez has ruined his reputation, his legacy and most likely, the remainder of his life.

Here’s what public relations advice might have done for Rodriguez that legal counsel failed so miserably to do.

·        Sound PR would have deemphasized the advisors.

Rodriguez was despised enough; he didn’t need consultants who were equally abhorred. But that’s what he got.

Rodriguez’s chief attorney, Joe Tacopina, was a notorious headline-grabber, whose combative style made him a fixture on cable television. To his credit, Tacopina renounced the “no comment” approach of many lawyers, relying instead on a no-prisoners, let-‘em-have it confrontative style.

For Alex Rodriguez, for whom humility was a constant problem, Tacopina’s pushy public demeanor was the worst thing for his client.

In  August, while the Yankees battled to make the playoffs, Tacopina enlisted a no-holds-barred display of bombast that distracted the team and buried Rodriquez.

First, he accused Major League Baseball and its commissioner of staging a witch hunt to destroy A-Rod.

Next, he charged the Yankees with medical malfeasance, of trumping up Alex’s injuries so as not to have to pay him.

Finally, after insisting Rodriguez never took steroids, Tacopina dared MLB to release his client’s confidential drug-testing record. When MLB agreed to waive its rules and do just that, Tacopina called it a “publicity stunt” and a “trap.”

In hoisting the loudmouth attorney on his own petard, MLB correctly perceived that Tacopina’s high wire publicity act had won few A-Rod sympathizers. Finally, too late really to do much to restore goodwill, A-Rod himself announced that Tacopina would no longer make public statements in his behalf.

Sound public relations advice at the start would have insisted to Rodriguez that he, personally -- like Kobe Bryant  or Tiger Woods or Michael Vick  before him – handle the public defense and leave his advisors out of it.

·        Sound PR would have acknowledged his transgressions.

If Alex Rodriguez took steroids – which, in light of last week’s capitulation, undoubtedly he did -- then no amount of bellicosity from his attorney or denials from himself would have convinced people he didn’t.

Sound public relations called for advising Rodriguez to admit his errors. That’s what other high profile baseball players have done; they’ve admitted, apologized, accepted their suspensions and will return to the game.

In Rodriguez’s case, even with competent public relations advisors first from Sitrick & Co. and then Berk Communications, he either got no such counsel or wasn’t smart enough to heed it.

Just as Bill Clinton should have admitted the Monica Lewinsky affair and Martha Stewart the truth about her stock trades, Alex Rodriguez should have been counseled that in high profile public relations, the truth will out.

·        Sound PR would have painted A-Rod as a humbled, sympathetic figure.

Despite his extraordinary baseball talents, good looks and immense wealth, Alex Rodriguez has always come across as an uncomfortable public figure.  He is ill at ease in front of a microphone, lacks public relations instincts, and is generally perceived – probably through no fault of his own – as detached and supercilious.

In other words, he is a perfect candidate for public relations guidance.

In the steroids case, Rodriguez was so guilty that his only chance to redeem any semblance of sympathy was not only to admit his transgressions but to ask for understanding and even forgiveness.

False humility, of course, rarely works. But most who know him say that Alex Rodriguez truly loves to play baseball and respects the game. If anyone could be “coached” to present a fuller, more truthful, more sympathetic portrait of himself, it was A-Rod.

And today, despite his youth and ability and great wealth, Alex Rodriguez remains a sad and defeated figure, victimized by, as much as anything else, bad advice.

Fraser P. Seitel has been a communications consultant, author and teacher for 30 years. He may be reached directly at yusake@aol.com. He is the author of the Prentice- Hall text The Practice of Public Relations, now in its eleventh edition, and co-author of Idea Wise.