Havas PR hosted Andrew Yang, CEO/founder of Venture for America, at a breakfast in its New York office on Feb. 6. 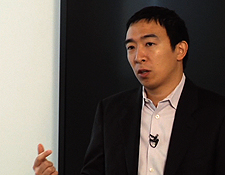 Havas PR chief Marian Salzman serves on VfA’s advisory board. She said her goal is to provide “talented young entrepreneurs a field where they can run faster and freer.”

Yang has just published “Smart People Should Build Things: How to Restore Our Culture of Achievement, Build a Plath for Entrepreneurs and Create New Jobs in America.”

Arianna Huffington calls it a “road map for young people for designing their careers, a playbook for policy makers for rebuilding our cities and a path toward moving entrepreneurship back to the center of the American economy.”

Yang once ran Manhattan GMAT, the test preparation firm that was acquired by Kaplan in 2009.