Lawsuits by Omnicom and three other companies against small stockholder John Chevedden in four different U.S. district courts are a threat to corporate democracy by exerting a “chilling effect” on stockholder actions, he charges. 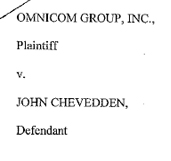 Chevedden, acting as his own lawyer, filed a brief (PDF) Feb. 20 in U.S. District Court for the Southern District of New York, saying that shareholders will be afraid to file proposals for voting at the annual meeting if they face being hit with lawsuits.

OMC’s actions vs. Chevedden demand that he pay OMC’s legal costs in this action.

Chevedden’s proposal, which OMC is fighting, would keep voting on shareholder proposals confidential until the annual meeting. Management, at present, can have access to how voting on proposals is going which gives it an unfair edge, say the supporters of confidentiality.

A process for settling such disputes is at the Securities & Exchange Commission but OMC and the other companies have chosen to bypass that.

“The corporate bar has taken notice of this opportunity to create a mismatch in legal firepower between a large publicly traded company and a small shareholder it would like to crush because he has submitted a proposal that management opposes.

“Consequently, the ‘let’s do an end run around the SEC and sue Chevedden’ strategy has attracted corporate lawyers representing major corporations who have accelerated the pace, suing Chevedden from sea to shining sea and drowning him in a barrage of lawsuits.

“In January, 2014 alone, in wolf pack fashion, four different public companies sued Chevedden in four different district courts, including this one, which may be a record in lawsuits in one month brought by different large corporations against one small individual defendant.”

Dissidents Will Be Intimidated

Corporate critics will think twice about submitting proposals for voting at the annual meeting, many of which have to do with attempts to reign in executive pay packages, if they fear being dragged into court, says Chevedden.

John Wren, CEO of OMC, and Randall Weisenburger, COO, are two of the highest paid executives in the U.S., earning pay packages of $53.3 million and $31.5M, respectively, in 2012.

Both also have OMC stock and stock options.

Wren was the 11th highest paid CEO in 2012, according to a chart circulated by Bolt Insurance last year. It calculated his remuneration at $42.6M which placed him ahead of JPMorgan’s Jamie Dimon’s $41.9M. Chevedden, GMI Ratings, co-founded by Nell Minow, and others have been critical of such packages. An extensive story on the quest by companies to have exclusive access to shareholder voting appeared in the May 15 2013 New York Times. It covered details of such a battle at JPMorgan Chase last year.

“If this trend continues, it will surely diminish the effectiveness of Rule 14a-8 [SEC process for shareholder proposals] as a means to promote shareholder democracy,” says the Chevedden memorandum.

He tells the District Court that OMC is “effectively forum shopping, hoping that, with out the benefit of hearing from the SEC, this Court will be more sympathetic than the SEC staff would be to its position and less likely than the staff to give the small shareholder a fair shake.”

Chevedden has promised not to sue OMC if the SEC turns down his request for confidentiality of stockholder votes.

Courts may become “inundated with these sorts of forum shopping lawsuits even though the issues can be handled much more efficiently buy the SEC staff vetting them,” says the memorandum. Companies that disagree with staff decisions can then seek judicial relief, it adds.

OMC Meeting is May 20

The OMC meeting is May 20 but the location has not been announced. Meetings were in New York until 2002 when they were shifted out-of-town.

The O’Dwyer Co., which has stock in OMC, was able to cover the meetings, which were held about five blocks from O’Dwyer offices on Madison Ave.

The press conference announcing the planned merger of OMC and Publicis last year was held in Paris. There was a teleconference the next day at the New York Stock Exchange for analysts and other callers but no in-person press conference.