There is nothing wrong with the National Security Agency stealing or subverting encrypted material or stockpiling the data of American citizens, according to Vice Admiral Michael Rogers, who is Obama’s choice to lead the spy agency. Big Brother knows best. 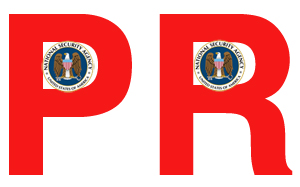 To Rogers, it’s all just a PR problem. He told his Senate Armed Services Committee confirmation hearing on March 11: “I believe one of the takeaways from the situation over the last few months is that as an intelligence professional I have to be capable of communicating in a way that highlights what we are doing and why to the greatest extent possible.”

How simplistic is his view that one can just PR (e.g., cover-up or sugarcoat) your woes away. Rogers is clueless about PR, or in the words of Texas populist Jim Hightower, when it comes to PR, Rogers is like a goat on astroturf.

The vice admiral is apparently talking about “spin” or “propaganda,” actions used to sell tainted goods or policies. PR is not about glossing over or buffing questionable behavior.

PR is facts-based. It is what it is. Critics of the NSA’s eavesdropping on Americans have valid concerns with privacy rights. That concern must be dealt with. It’s the core issue. PR can’t be use to justify that misdeed.

Rogers should chat with Intelligence Committee chief Diane Feinstein, who was pro-espionage agency prior to this week’s outburst over allegations that the NSA hacked the committee’s computers.

She calls suspected theft of classified materials by the CIA a violation of the separation of powers between the executive and legislative branches of government. The California Senator has more than PR on her mind.

Meanwhile, New York Times executive editor Jill Abramson told an industry panel in New York today that her paper has beefed up its encryption capabilities in the wake of hacking by the NSA and China military.

But what really keeps Abramson up at night are the seven criminal leaks suits lodged in Obama’s ongoing witch-hunt against unauthorized disclosures.

That crackdown may result in jail time for NYT veteran Jim Risen, pending his appeal to the Supreme Court.