GM CEO Mary Barra gave PR a shot in the arm March 18 by having a press conference, reviving an almost dead PR staple. President Obama, J&J, Omnicom, PRSA and others should take note.

Barra, only two months into her role as the first woman CEO of General Motors, met reporters March 18 to field questions about what PR author Fraser Seitel called “the most damaging safety/cover-up scandal in GM’s 106-year history.” 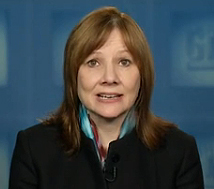 Twelve drivers reportedly died due to faulty GM ignition switches, a problem the company supposedly knew about for ten years but did not correct. Engines and airbags could be disabled if ignition switches in small car Cobalts were bumped or weighed down by heavy key rings.

Seitel, writing for CNNMoney, a service of CNN, Fortune and Money, said Barra faced “a room full of reporters” at GM headquarters and thus showed she “appears to be on top of the problem.” Seitel felt this conference was “unprecedented” for GM, especially in the midst of a recall. It was Barr’s first meeting with reporters since 1.6 milion Cobalts were recalled in February.

Bill Vlasic of the New York Times praised Barra for jumping “personally and publicly into the middle of one of the gravest safety problems in the company’s history.”

Barra’s “performance” was said by Vlasic to be a “marked departure from the norm in the auto industry where corporate chiefs routinely avoid talking about recalls unless subpoenaed by Congress.” He said that “Unlike some other corporations that have had public crisis, GM has not gone outside for professional help from crisis management firms.”

Barra met for 45 minutes with 13 reporters representing the major print and broadcast media and wire services. There were no restrictions on the questions and everything was on the record. There is no video of the session.

Seitel does have a big caveat to Barra’s performance. She has yet to say GM is responsible for the deaths and accidents because they took place at the “old GM.” The new GM (post bankruptcy) is absolved of any legal claims against the old GM. Seitel’s column today, “Mary Barra Battles the Lawyers,” says it’s a “conflict of interest” for GM to use for the investigation the very law firms (King & Spalding and Jenner & Block) that were involved in defending “Switchgate” lawsuits.

Corporate press conferences have been on the endangered species list since 1983 when Johnson & Johnson was able to avoid one after seven people died from poisoned Tylenol capsules. J&J said it handled hundreds of press calls one-by-one and that was sufficient.

President Obama has also set a poor example by holding fewer press conferences in his first four years than any president since Reagan—79.  Reagan held 27; Bush II, 89; Clinton, 133, and Bush I, 133.

In the Court of Public Opinion: Wining Strategies for Litigation Communication by lawyer and PR practitioner James Haggerty advises, “In most cases, resist the press conference.”

Writes Haggerty: “There is an uncontrollability to the press conference format that can often lead client and attorney down the road to disaster. Not only are dozens of reporters firing questions at you, they’re feeding off one another—following up on another reporter’s questions, latching on to a point picked up from the last. Indeed, many times I’ve seen mainstream reporters influenced by the questioning of so-called “fringe” media present at press conferences with the views of the alternative press working their way into mainstream coverage.”

“Fringe Media?” That Would Be Us!

Imagine a J&J press conference on Tylenol where questions were flung at executives by Scott Bartz, seven-year employee who authored The Tylenol Mafia, 489 pages of evidence that the Tylenol capsules were poisoned while still in the J&J distribution chain.

Bartz has been unable to get any mention at all in the New York Times, the most enthusiastic booster  of Tylenol as the “gold standard of crisis communications.” However, Wikipedia recently expanded its section  on the Bartz book to 200 words.

Another company known for press avoidance is Omnicom, which just lost lawsuits aimed at blocking stockholders from keeping stockholder votes confidential until the annual meeting. OMC and other companies sought to have exclusive access to stockholder voting prior to the meetings. OMC has teleconferences with security analysts but does not hold press conferences. Its annual meeting, formerly in New York, has been on the road since 2002.

Twenty funds and stockholder groups have criticized the OMC lawsuits, noting they bypassed a free SEC process for hearing such actions.

When Haggerty refers to “fringe media,” he means the specialist, trade or alternative press which often knows far more about any subject and has far more freedom to report it than any of the mainstream press.

Imagine a press conference hosted by Bill Murray, the resigned CEO of PR Society of America. The questions posed by O’Dwyer reporters would be far different from those of Stuart Elliott, ad columnist of NYT, whose most recent columns on PR told of FleishmanHillard’s new ad campaign and 2012 PRSA chair Rosanna Fiske’s quest for a definition of PR.

We would seek a detailed explanation of why Murray would quit with nine months to go on a contract that paid him almost $400K (not counting the $61K he got as a bonus in 2012). We would put a lot of subjects on the public record that mainstream reporters had never heard of.

Murray, the most reclusive of all the Society COOs we have dealt with since 1968, has a condition called spasmodic dysphonia, which causes a choking quality to his speech.


The condition is apparent in this YouTube video, a 1:28 minute interview he gave to the Portland, Ore., chapter of the Society on March 11, four days after he announced his resignation.

Murray speaks highly of the Society and all the services it can offer to communicators but there is no explanation as to why he suddenly resigned to go to a much smaller trade group, the National Coffee Assn., which has a staff of eight vs. nearly 60 at the Society. He became the first staff CEO of the Society Oct. 26, 2013, a signal honor.

We theorized his speech problem is one reason or the main reason he has never, to our knowledge, addressed a non-Society group in his seven years. The 2006 search committee said it was seeking a “charismatic” leader who would be “an accomplished public speaker.”

Murray, while supposedly leading a “Business Case for PR” program of the Society, never appeared on any broadcast media that we know of and skipped numerous PR events such as the Institute for PR dinner Nov. 21 in New York. He was in Switzerland for a meeting of the Global Alliance for PR and Comms. Mgmt. Also skipped was the Council of PR Firms dinner Oct. 23 in New York. He did not attend the Paladin dinner of the Society’s Foundation for Harold Burson on April 30, 2012.

Murray held no press conferences in his seven years and we never talked to him on the phone nor met with him except for a lunch during his first month in office. The Society in 2010 started physically blocking us from covering the Assembly and all the sessions at the national conference. Murray signed a 23-page list of charges dated Sept. 1, 2011 that had a formal boycott against this writer personally and anyone connected with the O’Dwyer Co.

Seitel writes that legal should not trump the court of pubic opinion. It does at the Society which spent $583,608 on lawyers in the past nine years and hits members with legal concepts and threats. Our lawyers challenged the legality of the “contract” members are supposed to sign in order to access the Society’s website. What the Society is trying to foist on the members is “not a contract”, they say.

The Society, unless chapter presidents and other leaders organize and put a stop to it, will hire another high-priced association executive. PR people will continue to be virtually banned from working at their own h.q. Nearly a half million will be spent yearly on “travel” which is really travel, meals and hotels for staff and leaders.  Members need to examine the original chits for all this spending. All the board ever gets is secondary reports.

What's needed is for a senior member or group of seniors to go to h.q. and gain access to all the locked-up info such as the bank balance, pay packages of the top six staffers, list of Assembly delegates, list and contact points of all staffers, and access to the single list of chapter presidents reachable with one e-mail. The "Leadership Rally" planned for June 13-14, a secretive $150,000 boondoggle for chapter presidents, section and district heads, should be cancelled.

Joe Cohen, 2014 chair, is refusing any move to take over the CEO's post even though Murray is vacating it. This could be quickly accomplished with an Assembly teleconference. The Society, in naming Murray CEO last October and saying he was CEO all along in practice, is placing the blame for all the noxious, anti-communications, anti-press, anti-New York and anti-democratic practices on his head. Maybe he decided to stop shouldering this burden.