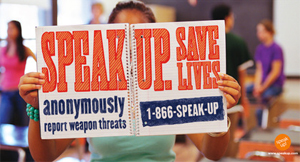 The Brady Center to Prevent Gun Violence has engaged Rubenstein Associates as the Washington-based gun violence prevention group ramps up its campaign focused on youth.

The Campaign, named after Reagan press secretary Jim Brady and his wife, received an infusion of members and funds after the Sandy Hook Elementary School shooting in late 2012 and has lobbied in Washington and statehouses for more stringent gun safety laws.

"We are very pleased to be working with the Brady Center on its campaign against gun violence," Suzi Halpin, executive VP at Rubenstein, told O'Dwyer's. The firm began the work earlier this year.

The Campaign this week is rolling out a PSA and social media push, "Speak Up," coinciding with National Youth Violence Prevention Week, to urge students to report threats and warning signs of violence in schools. "When students speak up, they can save lives," said Brady Campaign president Dan Gross, adding that the PSA campaign "is about something real that students can do to help make their schools and communities safer.