"The PR person doesn't have the final say" but can only "fight" and "make their voice heard," Ruder Finn's Michael Schubert told the "PR Ethics Trial" of PRSA/New York Sept. 8.

Said Schubert: "At the end of the day, you don't have the final say. You really don't. And having been there, arguing for the right thing to do and hearing the lawyer say, you can't say this and you can't say that, I think that's a reality and you should understand that…"

The chapter's 1.5-hour event laid bare many of the dilemmas, conflicts and quandaries facing PR people that make it one of the most stressful jobs—No. 5 for 2013 on Careercast's list of stressful occupations

As noted by an Atlantic article, most of those now shouldering this burden are women. Some are new mothers

Prosecutor Paul Holmes of The Holmes Report voiced alarm that PR people are using social media "to get as much past the gatekeeper (journalists) as they can." Consumers are not aware of the "game" that is being played by PR and the press which puts an added burden on PR people to be "even more honest," he said.

Discussion brought out that PR people who discover illegal or abusive practices of clients can only resign the account and cannot report this to anyone.

Panelist Steve Cody of Peppercomm said his firm has resigned many accounts because of ethical objections. However, he would not name any of them.

There's plenty of "meat" about PR ethics in the 16-page transcript of the chapter's event that was purchased by the O'Dwyer Co. after the chapter said a transcript was not in its budget. The chapter is adding a transcript to its website today.

The national Society has a one-hour "live" ethics webinar set for 3 p.m. Thursday which is Rosh Hashanah and we trust it will switch this date.

National has just signed as its Oct. 12 opening speaker at the conference in D.C. Walter Isaacson, president and CEO of the Aspen Institute, who has authored The Innovators: How a Group of Hackers, Geniuses and Geeks Created the Digital Revolution. It will be published Oct. 7.

Aspen, which champions "civil dialogue" on "controversial subjects" and encourages "enlightened, responsible leadership," had revenues of $94.5 million in 2012 (latest year available). Net assets were $186M. The pay package of Isaacson, former CEO of CNN and editor of Time magazine, was $843,328.

An email was sent Sept. 19 to Isaacson and his PR staffers as follows:

I want you to know that PRSA has a formal, written boycott against the O'Dwyer Co., which has covered the PR industry daily since 1968. This prevents our staff from covering Mr. Isaacson at the national conference Oct. 11-14 or exhibiting our six informational products.

Attempts by the Society to discredit our company have been rejected by the National Press Club, New York State Senator Liz Krueger, and numerous websites and blogs. The reason for the boycott is that our products compete with the Society's. It refuses to let us exhibit our products although it has allowed exhibits of our competitors in past years.

Please open this statement by NPC scolding PRSA which it sent to 390 major media.

The New York Times and Washington Post have both referred to us as the "bible of PR."

I hope one of you will talk to me. VP-PR of PRSA is Stephanie Cegielski (stephanie.cegielski@prsa.org). There is no chief of staff. William Murray, who was CEO, resigned March 7 effective June 1, 2014. Chair of the Society is Joseph Cohen (joseph.cohen@prsa.org).

Losses at Cision and Vocus, providers of contacts to hundreds of thousands of editors, indicate the move of much of the PR industry from pitching editors to interfacing directly with consumers via social media.

Cision had a loss of $41 million in the latest year available and Vocus had a loss of $21.8 million. Both were purchased earlier this year by the GTCR hedge fund of Chicago. Revenues of Vocus were about $180M and Cision, $156M.

Cision was one of the five sponsors of the New York chapter's event along with PR Newswire, Factiva of Dow Jones, Brandpoint, RCM Broadcast Communications and D S Simon Productions. 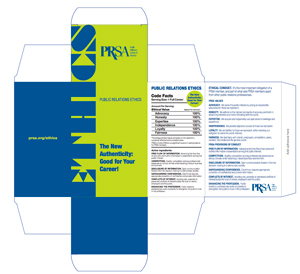 National's ethics panel is open to non-members including reporters if they pay $200. A credit card purchase for this amount has been sent to the Society and Cegielski said it will be accepted.

All are members of the Board of Ethics and Professional Standards of the Society.

Theme of the Society's "Ethics Month" observance is "The New Era of Authenticity." Focus is on how "ethical choices develop and maintain authentic and long-lasting (not to mention mutually beneficial) relationships."

A print/cut/fold poster was created by BEPS "to strengthen moral focus in the face of ever-changing PR environments."