Today is the 32nd anniversary of the seven Tylenol murders, a crime buried in a whirlwind of lies that made a hero out of the company that bore heavy responsibility for the murders -- Johnson & Johnson.

Media, including the New York Times, Washington Post, The Economist, Fortune and the Christian Science Monitor, have looked and continue to look at the tragic event from the wrong end of the telescope -- missing the "elephant in the room." 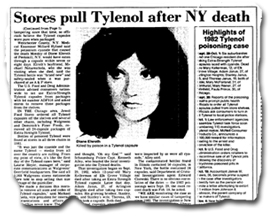 The right end is examining the death of 23-year-old Diane Elsroth of Peekskill on Feb. 17, 1986 from a Tylenol capsule laced with cyanide. No over-the-counter drug should ever have been sold in easily taken apart and spiked capsules and especially not after seven people died horrible deaths that way.

The introduction of "tamper-resistant" packaging on Nov. 11, 1982, less than six weeks after the murders, was pure spin that ignored the possibility that someone could open a package, doctor the capsules, and put them back in the medicine cabinet. Someone in a bar could hand a spiked capsule to a victim.

The supposition that only some deranged person would poison capsules and put them back on store shelves to murder persons unknown was preposterous.

J&J, like a magician distracting an audience with one hand while reaching into his or her pocket with another, made the issue the packaging rather than the capsules. Media were quick to swallow this poisoned pill.

Flawed Capsules Rushed Back to Market

J&J, rushing back to the market with the fatally-flawed capsules (when unalterable tablets dissolve just as quickly in the stomach), was obviously concerned with market share and not the well-being of the public. It's also obvious that J&J feared someone might miss-use the capsules and was ready with tamper-resistant packaging. It ran commercials as early as Oct. 24, 1982 to promote the new packaging.

Red-faced CEO James Burke, facing a conference at the National Press Club Feb. 19, 1986, two days after the death of Elsroth, said, "Yes, indeed, I am," when asked whether he was sorry J&J continued to sell Tylenols in capsules.

Amazing about this story is the refusal of major media to re-visit the 1982-86 murders. A major culprit is the PR Society which in 1983 gave J&J a special Silver Anvil in the crisis category after it had lost to Hygrade Hot Dogs, which had a contamination crisis.

Tight-lipped J&J disqualified itself from an Anvil by refusing to provide a budget for handling the Tylenol murders. The Society obviously wanted to please J&J which bought color ads in the Strategist quarterly and gave $2.6M in 1998 to fund Kids in a Drug Free Society, a creation of the Foundation of the Society.

PRSA Adds to its Tylenol Burden

The PR Society of America has added to its burden of promoting the false story of the ethical treatment of the Tylenol murders by hosting panels this month that praised what J&J did. The statements made on those panels need correcting. In addition, PRSA should correct the Silver Anvil entry of 1983, which is still being sold on its website.

Michael Schubert, a senior executive of Ruder Finn, told the Sept. 8 ethics panel of the New York chapter that J&J's behavior in 1982 after the Tylenol murders was a "shining example" of ethical corporate behavior. He said J&J's PR strategy "was not only to be transparent and honest and ask forgiveness about it but was to remediate the problem and the result was that we got stronger, more tamper-resistant on medicines going forward."

Maria Sonin, of the Ethics Officer Assn., told an ethics panel of the national Society Sept. 25 that the Tylenol poisonings were the work of a "madman" and that what Burke did got him "hailed as a hero and people have written about that again and again and again."

Wikipedia, unlike the NYT, Washington Post, Economist and other major media, has acknowledged that ex-J&J employee Scott Bartz has come up with evidence in the 200-page TYMURS book that the 1982 poisonings took place on J&J's watch.

Amazingly, WP has two lengthy essays on the 1982 murders that fail to take up the subject of the 1986 murder of Elsroth.

The entry under "Chicago Tylenol Murders" gives the basic facts of the crime and devotes 200 words to the Bartz book and the crusade by Michelle Rosen, daughter of victim Mary Reiner, to have authorities re-open the case. There is no mention of the Elsroth murder.

Text, under the heading, "Alternative Theory," is as follows:

"Scott Bartz, a former Johnson employee, argues that the poisoned Tylenol was introduced not, as the media reported, in retail stores, but in a distributor's warehouse in the Chicago area. He believes that Johnson & Johnson knew this but intentionally suppressed evidence leading to this conclusion.

"In November of 2012 Bartz gave his second interview to investigative reporter Gary Franchi. The interview, aired on Next News Network's WHDT World News, made the case for his book. During the 25-minute interview he stated, "My research showed the tampering occurred within the distribution network for Tylenol and of course Johnson & Johnson, to avoid liability, would not want to be associated with distributing this Tylenol."

"On September 24, 2013, Michelle Rosen, daughter of victim Mary (Lynn) Reiner, appeared on WHDT to provide testimony of her mother's ingestion of the laced Tylenol. According to Rosen, Mary Reiner had given birth 6 days prior and received her Tylenol from the hospital pharmacy. Bartz's investigation into Reiner's ingestion is believed, by Rosen, to be the "smoking gun" because she concluded the culprit presented by authorities could not have gained access to a secure hospital pharmacy.

A special discussion of the Tylenol murders on Wikibooks fails to mention the murder of Elsroth. It says J&J "seemed to show a perfect example of how businesses should professionally and ethically react to crises. They placed human lives above profit and focused on longterm sustainability.

J&J quickly recalled Tylenol bottles and notified the public sufficiently to prevent further poisonings. Seeming not to be influenced by cost benefit analysis, J&J made the largest recall ever in the drug industry."

A nearly three-age feature in the Aug. 22 Sunday NYT praised J&J's handling of the 1982 murders as "Exhibit A in the lesson book on forthright crisis management." The front page business section article was by Peter Goodman.

NYT reporter Natasha Singer on May 3, 2010 wrote that "J&J is considered a model for the consumer products industry for its fast and adept handling of a Tylenol scare in 1982 when seven people in Chicago died after taking capsules that had been laced with cyanide."

The Washington Post said "J&J has effectively demonstrated how a major business ought to handle a disaster."

The Economist said in April 2010 that J&J/Tylenol is the "gold standard in crisis management." The comment was in a column called "Schumpeter" written by Adrian Woolridge.

The Christian Science Monitor said Jan. 15, 2010 that what J&J did in 1982 "is still regarded as a shining example of corporate social responsibility."

The Motley Fool said on May 6, 2011 that what J&J did "has always been the poster child for how to handle a crisis."

Fortune magazine on May 28, 2007, hailed J&J/Tylenol in a full page article as the "gold standard in crisis control." The writer was Jia Lynn Yant.

James Lukaszewski, a member of the Ethics Board of the PR Society and referred to as an expert in crises, told this website in 2012 that "The 1982 Tylenol incident remains the most internationally recognized successful crisis incident response, even after all these years."

The March 2008 Tactics monthly of the PR Society praised J&J/Tylenol as "an enduring example of crisis management done right." It quoted J&J VP-PR Lawrence Foster as saying, "Every PR decision was based on sound, socially responsible principles."

Foster told Tactics that J&J was "completely open with the media" although no press conference was held. Telephone calls were handled privately with individual reporters. There was a teleconference on Nov. 11 when J&J introduced the new packaging. Questions were allowed then.