The belief in the efficacy of "spin" and "spin doctors" is so embedded in the U.S. culture that it cannot easily be dislodged, says Glass Jaw by D.C. counselor Eric Dezenhall.

Dezenhall says PR, which involves the "deification" of "spin doctors" or "fixers," has become the "American Merlin, an occult action figure that can control the uncontrollable, the common attribute of our superheroes." 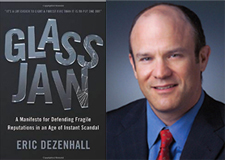 He cites such pop culture figures as Kerry Washington on ABC-TV’s "Scandal," who combines trysts with the President with counsel to the powerful; Robert De Niro tricking Iran leaders in "Wag the Dog"; fixer Harvey Keitel in "Pulp Fiction"; crisis manager Alan Cummings in "The Good Wife"; George Clooney's "cleaner/lawyer" in "Michael Clayton," and Nick Naylor in "Thank You for Smoking," which portrayed D.C. PR people working for tobacco, liquor and gun interests.

He feels that what they actually do for their clients is "not that impressive."

One case where spin has been successful, and which is mentioned several times in the book, is Johnson & Johnson’s portrayal of itself as innocent in the 1982 murders of seven Chicago-area citizens by poisoned Tylenols.

J&J’s view of itself is so ingrained in the media and in the culture that nothing thus far has been able to dislodge it, Dezenhall notes. Major media, led by three stories in the New York Times, have never wavered in their belief that the handling of the Tylenol deaths is the "gold standard" of crisis control.

While referring to J&J’s handling of the tragedy as "celebrated for decades as the gold standard of crisis management," and saying that the film, "The Insider" memorialized its alleged instant" withdrawal of Tylenols from the market (although it took a week), Dezenhall also notes that from 2009-12 the company was hit with billions of dollars worth of recalls that tarnished its "impeccable" image.

J&J deserves no praise whatever for its handling of the 1982 Tylenol murders because it rushed back onto the market in less than six weeks with the same flawed product in alleged "tamper-resistant" packaging that resulted in the death of 23-year-old Diane Elsroth four years later.

J&J fought the families of the seven 1982 victims in court for nine years, settling for what the families have said was a pittance. They were threatened with another nine years of legal wrangling if they didn’t cave.

Dezenhall says J&J "apologized" in 1982 which it never did and paid "hundreds of millions of dollars in settlements to the victims" which is not what we hear from one of the families. Some of the surviving relatives are continuing to press for the truth of this incident to get wide publicity.

The Tylenol case "ended well for J&J," Dezenhall writes. Yes, it was a triumph of spin that many institutions took to heart.

Although Robert Phillips of the U.K. is writing a book called, Trust Me, PR Is Dead, the Centre for Corporate PA, Australia is proclaiming "PR Is Dead," and PR is receding as a title used in corporate and agency PR, both the Council of PR Firms and PR Society of America have "doubled down" on the use of the term.

CPRF has just renamed itself as the "PR Council" although only eight of its 103 members use "PR" in their titles. Only six of the 50 largest firms in the O’Dwyer rankings use "PR" and none in the top 15. The PR Society has re-affirmed its commitment to its 50-year-old APR program.

The Seminar, formerly "PR Seminar," www.theseminar.biz this year inducted 35 new corporate members, none of them using "PR." None of the 76 corporations in the CCPA use the term PR, "corporate affairs" and "public affairs" being the dominant titles.

David Senay, outgoing PRC chair, told its annual dinner Oct. 22 that PR people should develop some "swagger" about their calling, and stop being defensive.

Senay’s talk was covered by PR Week/U.S. editor-in-chief Steve Barrett who defined swagger as "walk or behaving in a very confident and typically arrogant or aggressive way."

PR no doubt brings lots of useful news to people and raises funds for many good causes. But it also has a darker side involving manipulation of opinion and withholding of facts that make many in the business world shrink from using it.

Spin Can Be Good, Say Some

PRW/U.S., taking note of calls for the "death of PR," is running a poll asking readers "Is PR all about Spin?"

The results of the ongoing poll as of Nov. 9 were that 34% believe, "No, the profession has moved way beyond that," while 31% say, "Yes, but spin is not necessarily a negative thing." Another 19% agree that PR is "all about spin."

The finding that a third of respondents believe that spin, meaning lying, can be good, shows the weak moral underpinnings of the occupation. Another 19% agree PR is "all about spin."

How is it possible to show "swagger" about such a calling?

First order of business should be removing any instances of unethical policies or practices.

PR People "Pressured" to Do Wrong

The Ethics Resource Center, which polled 2,099 members of the PR Society in 2000 on ethical issues (10% of the members), found that half of the respondents "feel an extraordinary amount of pressure to compromise their ethical standards." One Society member said, "In some ways, lying permeates everything we do."

Member Kathy Fitzpatrick, then at Quinnipiac University but now at Florida International University, was describing the removal of enforcement provisions from the Code of the Society.

That was done even though 90% of the respondents "agreed that the Society should revoke membership for failure to meet Code standards" and the ERC itself advised that.

No PR group is doing "PR for PR." None of their leaders are facing the press in a press conference. Can there be such a thing as pressless PR? How about a national "Pick up the Phone When a Reporter Calls" Day?