Start with a strong point of view on matters large and small (from truth, religion and the American way right down to not just what the boss should be saying but wearing at a Congressional hearing). 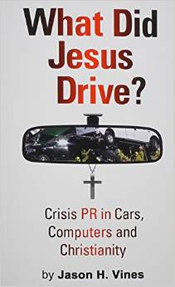 Add several cups of political incorrectness and profanity. Mix in with several tablespoons of chutzpah. Fold in a dollop of conspiracy (Ford, maybe even the guy "with his name on the building," were bugging your phone).

That's the recipe in a nutshell for the new anything-but-half-baked book What Did Jesus Drive? Crisis PR in Cars, Computers and Christianity by auto industry PR veteran Jason Vines.

"Ford and my Chrysler were caught with their marketing pants down; we were the corporate equivalent of singer George Michael in a public restroom."

"If your customers are 'misusing' your product or are being unintentionally harmed by it, do something about it."

"They had called in 'Mr. Shakedown' to help them out: Reverend Jesse Jackson...He's really good at what he does, despite the fact that it's usually a load of crap."

"SUA (front group) was a fictitious creation, made up, pure and simple, by the $100 billion-a-year plaintiff's bar supported by their 'special friends' masquerading as 'safety advocates.' These ambulance chasers and their advocate buddies have been and still are ignorantly embraced by an often lazy and sometimes 'short staffed' liberal 'news' media."

When was the last time you heard anyone who has toiled high up in the executive suites of three of the world's biggest corporations, not to mention at a religious book publisher, write or speak like this -- on and off-the-record?

There is such a profusion of these bon mots to be found in this book that many readers maybe excused from scratching their heads.

Is this a story about "crisis PR in cars, computers and Christianity," as the cover promises? Or a muckraking screenplay-in-the-making, celebrating some parts of at the very same time as he mocks the conventional wisdom about what public relations people working in corporations do and are really?

"It would expose a gigantic fissure between two of the world's most powerful industries--auto and oil--and it would test my will and character."

Vines' sometimes-tad-too-hyperbolic but always colorful takes on a range of strategies, tactics and players while at Nissan, Ford, Chrysler, Compuware and publisher Zondervan cuts to the chase for those readers who might yawn otherwise.

But that's not why this is a "must read" for every teacher, student, buyer and seller of public relations. Neither are the touted "don't hide your head in the sand, tell it like it is" crisis lessons learned he offers up, few of which will come as a revelation to anyone.

No, what makes this book invaluable is that he delivers by far the most authentic--candid, insightful, personality-rich, alternately boastful and modest, not always flattering--insider accounts of life at the top of Fortune 500 corporate communications in recent memory.

This is an admittedly one-sided account of a career looked at through a rearview mirror, safely several years away from the action. And that's exactly why what Vines' has put on paper is so important and useful to everyone who cares about the state of corporate PR and what the functions operating under that banner should look like up ahead.

Whatever agenda Vines has in writing is secondary, seemingly free of constraints, worries about next paychecks or offending. In return, he delivers a real, engaged voice not just as a good storyteller but a confident and, yes, sometimes cocky guy, comfortable in his own skin, not merely relishing but actually reveling in what he does for a living.

"PR people that are 'yes' people are worthless and do a disservice to any organization."

"Tell it like it is, clearly and succinctly. Natalie Wood did not die from 'excessive hydration.' She drowned. And Tupac Shakur didn't die from 'lead poisoning.' He was shot. The art of being clever or linguistically illusive will compromise the integrity of your organization."

"When it was time for lunch with (Ford CEO) Nasser, I walked (60 Minutes reporter Lesley) Stahl up one floor to Jacques' office... 'Where are you going?' asked Stahl. 'Jacques' a big boy, you don't me.' She would later confide that she'd never seen that before--a PR guy leave his boss to the media wolves--she was impressed."

Vines brings more than bravado to the table, however. In a few dozen pages, he conjures up scenes from the machinations between Ford and Firestone, during their "tire debacle," in almost diary-like detail, in some of the most informative on the delicate balancing act of supplier relations that I have ever read.

Even now, this remains a case study reminder for every company that what happens (and doesn't) in their supply chains is a vital source for leadership, knowledge and competitive advantage--or a hotbed for issues/crises management, if you ignore them.

Much the same is true for the intelligent light he sheds in several other chapters devoted to the auto industry's face-off against Big Oil firms on fuel efficiency standards and a menagerie of consumer, environmental, religious and other groups attacking everything but the kitchen sink about SUVs.

"Sometimes the best work a PR person can do is not actually coming up with clever catch phrases or one-liners, but rather coaxing those words out of the folks who are actually the experts in the field."

The portrait that emerges is of a savvy, connected, determined, articulate, passionate, decidedly high octane (more than once likening his drive to ADHD), incredibly hands-on leader, juggling time to stop, think and act strategically, against the perpetual roller-coaster of block-and-tackling daily tactics.

But that's also the other side of an important potential coin of learning offered by this book. Whether he intended to or not, Vines repeatedly demonstrates how, where and why the work of corporate communications since the 1980s has become ever more C suite-occupied, episodic and still, in light of all the social media hoopla, surprisingly mainstream press fixated.

A big chunk of thriving/surviving in this fishbowl, at least by his telling here, centers around deftly managing the needs, expectations, priorities, etc. of a pretty small cast of key exec-influencers and selective contact with a parallel tight circle of trusted industry, agency and other advisors.

In the world he describes, the balance of other activities manned by in-house PR teams are shaped by a prescribed calendar (e.g. analyst calls, annual reports/meetings, new product intros, trade shows), only to be interrupted by assorted crises large and small (sometimes hard to tell from the outside which is which by how they're handled), with brief respites in between.

While he cites employees, unions and shareholders as mission-critical, for example, they don't figure as much in his narrative. Indeed, most other constituencies seem to take a back seat to those hollering the loudest, including everyone from regulators, dealers and NGOs, to plaintiff's lawyers, trade groups and reporters.

It would be easy but foolhardy for potential readers to judge this book by its cover and dismiss it as being "mostly about the car business" and so not relevant to firms in every other industry, regulated or otherwise.

Guess again. No book, conference agenda, white paper or serious discussion about the future of corporate communications in any forum going forward will be complete without a reading of Jason Vines' story first.

On that score, at a time when talent brandishing PR degrees enter this field in record numbers, allow me to close with his opening passage: "I entered the public relations profession by accident. Sure, I had an undergraduate degree in communications, another in economics, and a master's degree in labor and industrial relations. (But) my plan was to work for a few years and then go to law school..."

I've not had the opportunity to work with Vines over the years. But you count me among those who believe the PR business would benefit from more "accidents" like him.