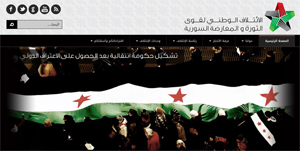 The Washington office of the National Coalition of Syrian Revolution and Opposition Forces has enlisted Independent Diplomat in New York to update the United Nations Security Council, U.S. Government and European Union on developments in its effort to overthrow Syrian president Bashar al- Assad.

He stepped down after giving then-secret evidence to an official inquiry into the use of intelligence on weapons of mass destruction ahead of the 2003 invasion of Iraq.

Under a one-year contract, ID has agreed to represent the Coalition for an undisclosed fee.

The work covers preparation of “significant diplomatic communications,” arranging meetings and improving the Coalition’s relations with the international media.

ID reports to Najib Ghadbian, the Coalition’s U.S. chief. He holds a PhD in political science from the City University of New York and teaches at the University of Arkansas.