Robert Phillips, former Edelman U.K. executive, has published Trust Me, PR Is Dead, a 300-page book that attacks the idea that information can be "managed" and that institutions can "implant messages" in target audiences. 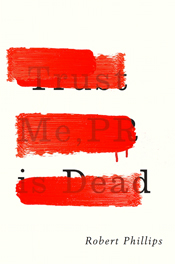 Phillips says that PR, like media, political parties, diplomacy and internal communications, is undergoing disruption at the hands of the web and is "seemingly unaware of its own death throes."

He says there is a new age of "individual empowerment" in which power is shifting from state to citizen, employer to employee, and corporation to citizen-consumer.

Phillips published Citizen Renaissance in 2008 which had a similar call for "citizen revolution to help address huge issues of well-being and climate change." He says that global warming cannot be controlled unless "we leave a large proportion of the remaining fossil fuels in the ground."

"Our communications world is now social—of and between the people—and democratic, because it gives voice to all," he writes. "Joined together, this provides a unique opportunity for communications to be transformative…we cannot continue spouting flimsy research statistics, empty slogans, and crass diversionary tactics."

Advance publicity on the book last fall touched off rebuttals from PR executives and groups including Kathy Cripps, president of the PR Council, which changed its name from the Council of PR Firms but kept PR in the title.

"Whether a firm is helping clients to create dialogue in social communities, engendering trust with their audiences, or moving people to action, it’s PR and it’s never been more relevant," she said.

Only eight of the current 103 Council members use "PR" in their titles, down from 13 a year ago. Only six of the 50 largest firms ranked by O'Dwyer's use PR and none in the top 15. Only 11% of the 1,450 registrants at the 2014 conference of the PR Society in D.C. last October used PR as part of their titles. Using "communications" somewhere in their titles were 386 or 26% of the registrants.

PR executives told an ethics panel of the Society's New York chapter last year that lawyers "have the final say" in communications matters.

The Centre for Corporate Public Affairs, Melbourne, published a five-page essay in 2013 called "PR Is Dead" by director Wayne Burns saying only one percent of the organizations it surveyed had a "PR" function.

PR survives only on the "tactical fringes of marketing communications," he wrote. What was once seen as "good PR," positive and frequent news media coverage and reporting, well attended corporate events and product launches, marketing campaigns—are not an end in themselves." Currently valued are "socio-political outcomes defined and generated by organizational strategy, and by PA strategy that contributes to and underpins broader organizational objectives," he says.

Up on Measurement, Down on CSR, Internal PR

He has long been a foe of ad value equivalency (AVE), which multiplies ad space by anywhere from three to ten times the dollar value of the space. The R.H. Macy formula was ten times.

Almost all PR counselors call AVE a "wicked" measurement but he feels at least half of them "use it to justify success to clients."

Better tools are available, he says. "With better data, gathered in real time, we can begin to track sentiment in media—just as supermarkets can move stock between aisles and at different heights in immediate response to customer demands. We can focus on what is engaging and when best to engage. We are guided not by the corporation’s blind supply, but by the citizen-consumer’s real time demand."

Other sectors than PR, he writes, "simply offer greater insight and more measurable success…seventy-five years after Edward Bernays germinated the modern PR industry, there is bizarrely still no consistent application of proper measurement criteria…show me one board-level executive who is prepared to sign off on a significant budget against loose promises of increased awareness or engagement…without proper measurement, there can be no accountability. And without accountability, PR will only further become marginalized."

Corporate Social Responsibility was a "trend spotted early by PR folk" but in the "frenzy to monetize, the industry failed to think," says Phillips. "Rather than lead a progressive agenda based on co-created, citizen-centric actions, it defaulted to selling stuff. What emerged was mostly ‘greenwash’ and thereafter an ill-formed CSR industry that today is more about bureaucratic, tick-box compliance and reporting than it is about social movement and societal change."

Behaviorial trust has to "sit at the heart of everything and be embedded in every business action," according to Phillips. "It cannot be either side-channelled or sub-contracted. Trust is built through the honest behaviors of all real people from within, not by rules and words commanded from above. Neither advertising nor over-spun PR will work in building a brand or company."

A "re-branded CSR practitioner" has told him that a "reform movement" has started within the CSR sector.

The all-staff email, which went to 20,000 BBC inboxes, is "possibly the most loathed of all internal communication," she writes.

"My emails, in an era of cutbacks, were rarely pleasant to write or read. They typically announced the removal of some perk, some new rule to follow or, worse still, another below-inflation pay deal or even redundancies. One day I got a call from a guy in News who said ‘my emails were crap and I should get someone else to write them for me’…I realized with dismay that he was right."

A flaw with company emails, she notes, is that they may not remain within the company. "A contentious BBC all-staff email appears on every news outlet within minutes," she said.

Adams says the future "knowledge-based economy will rely heavily on employees making a conscious choice to give their creativity and their knowledge to their employers."

Phillips does not have many words of praise for captains of industry but one exception is Paul Polman, CEO of Unilever since 2009.

Calling Unilever the "world’s second-largest Fast Moving Consumer Goods Company," with seven of ten households using its products, Phillips says "Polman is the pin-up for a new generation of CEOs—thoughtful, responsible and challenging convention. His stated mission, to double the company’s sales while halving its environmental footprint, boldly goes where few CEOs have gone before."

The company touts its "Unilever Sustainable Living Plan." Polman, who received an Outstanding Achievement Award of the Atlantic Council in 2012, said, "Now is the time for business to step-up and lead." Phillips noted that this was also the key message of the 2012 Edelman Trust Barometer which Richard Edelman had shared with Polman while at the World Economic Forum a few months earlier.

To purchase an e-book need to access this link and hit "Pledge."