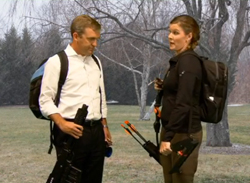 A leaked, internal Morgan Stanley video spoof of the "Hunger Games" has surfaced as a PR black eye mocking cutbacks at the investment bank.

Investment News first published the 10-minute video, “Margin Games: Manager on Fire,” featuring top executives who oversee a death match between branch managers of the bank and joke about how expendable the underlings are.

Coverage of leak comes after layoffs, cost-cutting and in the same week Morgan Stanley reached a settlement to pay $2.6B to the Justice Department for the bank’s role in the housing market collapse.

Investment News reported that MS Wealth Management CEO Greg Fleming nixed the video and it was never shown to its intended audience, an annual manager’s meeting.

Fox Business said the bank has launched an internal probe into who leaked the parody video, which cost around $100K to produce. Top Morgan Stanley brass reportedly held a meeting as the video spread virally on Feb. 25 to smoke out the leaker and possibly sanction the executive who approved the video’s production.