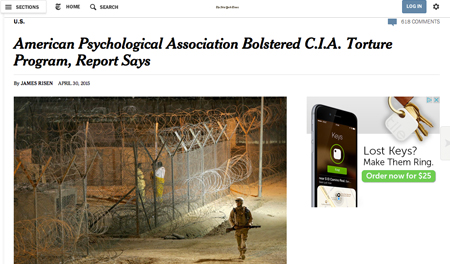 The American Psychological Assn. is carrying out an independent review of "re-circulated allegations" published today on the front page of the New York Times about its alleged support of the CIA's torture program to bolster President Bush's justification for abuse of prisoners in his "war on terror."

In a statement posted on its site, the APA said it refuted torture links made by NYT reporter James Risen when he first raised them in October.

The organization, however, believes that due to the seriousness of the allegations, an "independent and definitive review" was required.

It asked Sidley Austin attorney David Hoffman to review the charges. Hoffman's work is ongoing. He has unfettered access to APA records/procedures.

APA believes it's vital for the public to perceive Hoffman's work as fully independent, which is why it will not comment further about the allegations until the probe is complete.

The review will be made public when it is completed by early summer.

APA then plans an aggressive communications program to inform member sand the public of Hoffman's findings. That outreach will include national and international media, social outreach and same-day communications to APA members.