The $14.3 million Q1 loss of the New York Times, coupled with editorial decisions such as dropping the bridge and chess columns, put the focus on how the paper views its mission. 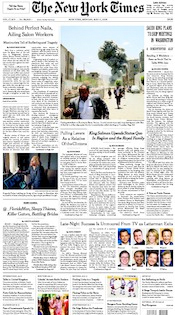 The reason given for the dropping of the columns was that a half million had to be cut from the cultural budget to save valuable editorial space.

Flabbergasted bridge and chess fans wondered how their less-than-a-column/mostly copy features proved so burdensome when the paper squanders acres of newsprint on color graphics that often take up a half page or more.

NYT writers should take the paper back from the graphics department, slash use of pictures and art, write much tighter, and cut the price of the paper from $2.50 to $1.

Michael Kinsley, in a 2010 article in the Atlantic, highlighted a 1,456-word piece in NYT as an example of wordiness that is driving readers from newspapers. Fewer than half the words in the opening sentence say what actually happened, he noted. "On the internet, news articles get to the point," he wrote.

A new high (or low) in wasted space was achieved April 2 when the article on page one of the NYT sports section had the top and bottom thirds blank. Seven inches of copy was sandwiched in between 11 inches of white space.

The story that NYT wanted so badly to highlight was the suicide of former football player Patrick Risha who suffered from head injuries that caused erratic behavior. It is a tragic, heart-rending story but it did not need all that wasted space to win the attention of readers.

While some topics get almost unlimited space such as negative coverage of Hillary Clinton, football injuries, gay marriage, Israeli politics, etc., other subjects get no coverage at all including new evidence on the 1982 Tylenol murders, the battle over eruvim in Hamptons, PR/communications, and other topics.

Color pictures are useful on occasion but do they have to be a half page?

Color in newspapers cannot compete with superior color on computers and hand-held devices. Furthermore, newsprint photos are stills and can’t compete with the video and sound available on the web.

NYT editors have long been enthralled with their ability to print color but the tail wags the dog. NYT’s print version could be half as big, turn a profit, and still report the news if it curbed its love affair with graphics. Its stock was as high as $70 in 1997 and $31 in 2006. Currently it is $13.76.

Where is NYT’s Ad Column?

Besides missing the bridge and chess columns (which we hope NYT will restore), we also miss the daily advertising column that had been a staple of the paper since the 1950s. Stuart Elliott, after doing the column for 23 years, took two years’ severance pay and other benefits and retired at the end of last year.

His successor is Sydney Ember, a 2012 graduate of Brown University who joined NYT last year to work on the DealBook financial section.

She has been writing on ad topics but the articles are not slugged "advertising." She often shares a byline with other NYT reporters. Recent articles cover advertisers spending more on mobile screens and problems Twitter has in attracting ads, noting Twitter’s stock has dropped.

Since this writer covered advertising daily from 1964 to 1972 for the New York Journal-American and Chicago Tribune, we have a special interest in coverage of the industry.

Advertising is a far cry from what it was in the 1960s and 70s and daily coverage by experienced writers is even more important now. PR has exploded in dollar volume and importance and should be one of the topics of the column. The public conglomerates WPP, Omnicom, Interpublic and Publicis have many billions of income from the numerous communications techniques that fall under the banner of PR.

A main story that we used to cover was who is doing the best work, who is the most creative? Quite often those were the firms that were growing the fastest. Almost all advertising migrated from companies to agencies in the 1960s and the same thing has happened to PR.

The rankings of PR firms by the O’Dwyer Co. and PR Week should be staples of NYT’s advertising coverage. Advertising Age’s advertising and PR rankings also should also be covered.

Major ad agencies and PR firms in the 1960s and 70s had staffers dedicated to contacting reporters. The PR Roundtable, made up of nearly 50 such staffers, had monthly meetings.

However, those days of press outreach ended in the 1980s. Reporters today have to initiate contacts in many instances.

Covering ad/PR is more challenging than ever but it remains of paramount importance. Elections are won and lost because of it, products live or die, companies thrive or go out of business. Should Ember cover PR, she must be aware that "ethics" are supposed to be the main concern of PR people. She has to cover advertising/PR from the point of view of the public as well as the point of view of companies and their advertising agencies and PR firms.

The May 4-17 New York mag has a 4,762-word article titled "The art of the sell, a half-century after Mad Men" by Jessica Pressler that examines the multitude of forces impacting advertising and communications.

The ad world is "a lot more complicated" than the world portrayed by "Mad Men," it notes.

"Before fast-forward, before the internet, before BuzzFeed started tweeting for Pepsi, the advertising industry, like the media industry, enjoyed the privileges of a bully pulpit," Pressler writes.

Steven Panariello of the Droga5 ad agency told Pressler that pressures have escalated in the past decade.

"You used to be able to put a 30-second commercial out, but now you’re orchestrating an entire system of content," he said. "You have to do posts for social and write headlines for press releases and manage the forum on the website, and it’s got to work in mobile and the notion of what it means to launch something has become fundamentally much more complex and demanding of your soul and your life."