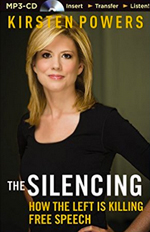 In 2015, political discourse has continued on a downward spiral to where it has been reduced to profane tweets,protests, demands for the termination of employment and ostracism of those who express controversial ideas.

In her new book, The Silencing: How the Left is Killing Free Speech [Regnery], USA Today columnist and FOX News Channel commentator Kirsten Powers examines many examples of what she calls the “illiberal left,” those who look to silence debate and impose viewpoints of morality, education, fairness and many other subjects.

Born to a pair of university professors in Alaska, Powers fondly remembers waving goodbye to Richard Nixon on television as he resigned the presidency when she was in preschool. Throughout The Silencing she wears her liberalism proudly.

What makes The Silencing worth reading is the description of swift and severe consequences for bucking liberal orthodoxy.

One of the techniques of the left, according to Powers, is to suggest that women who veer from liberal orthodoxy are not really women. For example, former Washington, D.C. schools chancellor Michelle Rhee and former CNN anchor Campbell Brown have advocated for reforms to tenure for public school teachers. For this stand, both of these women had their looks and intelligence insulted by legions of online detractors.

Another technique is to label journalists who aggressively cover the Obama administration as a conservative. CBS reporter Sharyl Attkisson learned this when she investigated the Obama administration. When she resigned from CBS former colleagues were all too happy to accuse her of having a political bias. Powers shows that Attkisson has done investigative stories on Republicans. She even won an Emmy for a story that was critical of the Bush administration and the Troubled Asset Relief Program (TARP).

College campuses, where political correctness began to take root, have gone beyond attempting to modify speech. Some colleges are requiring “trigger warnings,” notices on the class syllabus warning that some of the concepts discussed may be disturbing or unsettling. Students enter college to engage in critical thinking, yet according to the “illiberal left,” must be protected from anything controversial.

Another new tactic for defeating free speech is policies against “micro-aggressions”-- minor conversational questions such as “where are you from?” The theory is that such things have subtle biases. Recently the University of California Los Angeles (UCLA) classified the statement “America is the land of opportunity” as a micro-aggression.

To demonstrate how contentious things have become on college campuses, Powers points to a study that showed between 1987 and 2008, 138 protests of campus speeches led to 62 cancelled speeches. In only six years, 2009-14, 151 protests led to 62 speakers cancelling or being cancelled.

Powers also includes a chapter on the Left’s war on FOX News Channel. At first glance, it may seem like a self-serving gesture on behalf of her employer. A close read of that chapter reveals blatant efforts by the White House to exclude FOX News from numerous events and interviews. It is even more disturbing to see the White House excluding news photographers from covering the president on a daily basis. Instead, the White House releases its own photos and calls it “news.” Even veteran journalists Ann Compton of ABC and Brooks Kraft of Time opened up to Powers about the administration’s efforts to block access to information.

Powers does a good job getting numerous sources to talk about efforts to suppress speech in business and academia and the media. However, the book contains several noticeable errors, such as the statement that Barack Obama campaigned for president in 2013 or that Daniel Patrick Moynihan’s controversial report “The Negro Family: The Case for Action“ was issued during the Kennedy administration, when it was issued during Lyndon Johnson’s.

There have been many books on the subject of political correctness. One wonders if another one is needed. Powers’ work should cause concern for those who think about publicly expressing an opinion. The risks to one’s future and career are high. Reading The Silencing provides a realistic look at the power in certain corners to squelch ideas, as well as the courage to counter those efforts.