What in the world was drugmaker Duchesnay thinking when it tapped social media hound Kim Kardashian to shill for its Diclegis prescription drug for morning sickness?

When it comes to social media, it's a Wild West Show out there. That unsettled atmosphere requires a measure of self-restraint, or skittish Washington regulators may move to tighten restrictions on social media promotional activities. 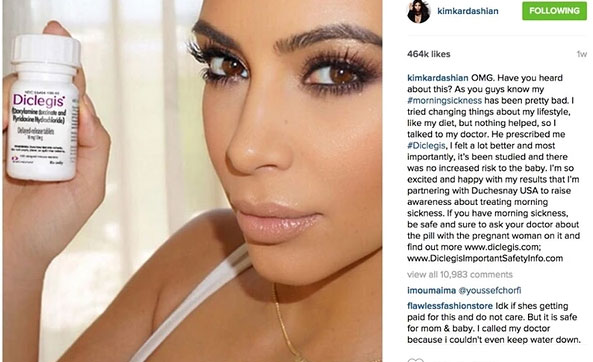 Nevertheless, Canada-based Duchesnay rolled the dice and came up with snake eyes, which triggered a warning letter from the Food and Drug Administration.

Duchesnay, which would not divulge the details of its ties with Kardashian, had to know she's not exactly an expert in regulations covering the Rx drug marketing arena.

Queen of all media Kardashian has been keeping her millions of loyal social media subjects up-to-date on her pregnancy-related struggles, especially with nausea.

What could Kim do? Voila! Diclegis apparently did the trick for Kardashian, who eagerly took to social media to spread the good news.

"OMG, Have you heard about this," Kardashian posted on Instagram. Yikes!

She blogged about "feeling better" and urged her followers to ask their doctors about the drug since "its been studied and there was no increased risk to the baby."

Kardashian wrote about partnering with Duchesnay USA "to raise awareness about treating morning sickness," a category that has only one medicine approved as a treatment. You guessed right: Diclegis.

Robert Dean, director of the FDA's Office of Prescription Drug Promotion unit, signed the warning letter and wrote that Kardashian's post omitted the risks associated with Diclegis and misleadingly fails to provide material information about the consequences that may result from its use.

Kardashian's posts about Diclegis have been taken down.

A statement from Duchesnay on the Kardashian affair says the company "takes its regulatory responsibilities very seriously and the social media "in this particular instance, needs to be in accordance with applicable rules and regulations."

That's a refreshing shift from Duchesnay's July 20 statement that praised Kardashian's Instagram post for encouraging pregnant women to talk to their healthcare provider.

More miscues from drug companies could result in a ban from social media promotions.