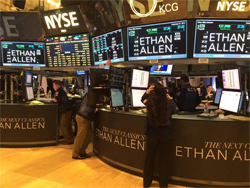 Sandell, which owns about 5.5% of the publicly traded company, claims Ethan Allen is significantly underperforming industry peers like Basset Furniture, Knoll and La-Z-Boy, among others, and is urging a sale to a private equity firm or recapitalization of its real estate assets, which Sandell claims are worth $450M.

The hedge fund says it is prepared to mount a proxy challenge but prefers to re-engage in talks.

Danbury, Conn.-based Ethan Allen initially moved up the date of its annual meeting to mid-October, but last week said it would revert back to a November date. "While the company's board had no indication that any shareholder planned to submit nominations or proposals, we do want to ensure any shareholder has the opportunity to do so and are pleased to reschedule the meeting to November 24, 2015," EAI chairman and CEO Farooq Kathwari said in a statement.