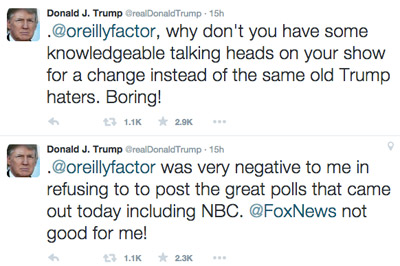 The Republican frontrunner Sept. 21 fired off a series of tweets directed against Fox News, adding yet another wrinkle to his ongoing feud with the cable news network.

The real estate mogul and White House wannabe let Fox News have it. He took shots, er, tweets, at National Review editor Rich Lowry, who said on the “The Kelly File” that Trump claims to have a great policy plan but never shares what it is, as well as Fox News host Bill O’Reilly.

Trump’s ire at Fox News stems from the first Republican debate, in which he accused Fox News host Megyn Kelly, one of the debate’s moderators, of treating him unfairly.

The tirades certainly won’t hurt Fox News. Au contraire, the latest tweets are likely to generate even more eyeballs for the network. It’s a cardinal rule of PR that Trump is surely aware: You foster what you condemn.

Not that he would admit in public, but, with Trump’s latest salvos against his network, Ailes must be thinking, It’s all good.

The more Trump fulminates against Fox all the more people will tune into the network to see what all the fuss concerning Trump is about. The ratings go up, as do Fox’s ad rates. And Trump, for all his anguish about how Fox is treating him, isn’t falling into the arms of Fox’s rivals (and lower-rated cable networks) CNN and MSNBC.