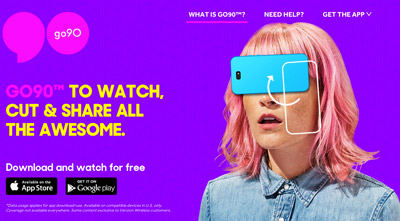 Most consumers love to watch videos on their smartphones, but younger folks (read: millennials) can’t seem to get enough, and Verizon knows it.

In an effort to corral such eyeballs, the telecomm giant on Thursday launched mobile video app Go90. The app, which is designed for consumers to share videos, features primetime shows, live music and sports, and Web programming.

The name Go90 apparently is a reference to how people turn their smartphones at a 90-degree angle to watch videos horizontally (rather than vertically).

The app is free and ad-supported; for now, it's only available in the U.S. for iOS and Android. It also restricts some videos to Verizon Wireless customers, but that’s no barrier to companies and agencies crafting content that would be suitable for the app.

PR execs and communicators are well aware of the tremendous growth in online video. For example, 70 percent of marketing pros report that video converts better than any other medium, according to a 2015 study conducted by MarketingProfs. What is more, video also boosts email open rates by 19 percent, per Forrester.

However, due to a lack of budget and/or resources many PR departments and agencies are finding it hard to build up their online-video inventory.

On the other hand, online video doesn’t have to be prohibitively expensive. It should be conversational, with a relevant message and devoid of marketing-and-sales jargon.