Maybe the constant kibitzing throughout PR and communications precincts about “real-time marketing” is just a bunch of lips flapping in the breeze.

So-called “real-time marketing” (such as “brand newsrooms”) ranked as the most overhyped marketing initiative, according to a new survey conducted by the PR Council.

The survey, which was released Thursday during the PR Council’s Critical Issues Forum, took the pulse of 56 senior marketing executives who represent major U.S. corporate members of the Association of National Advertisers. It found a significant gap between rhetoric and reality when it comes to developing and distributing real-time marketing programming. 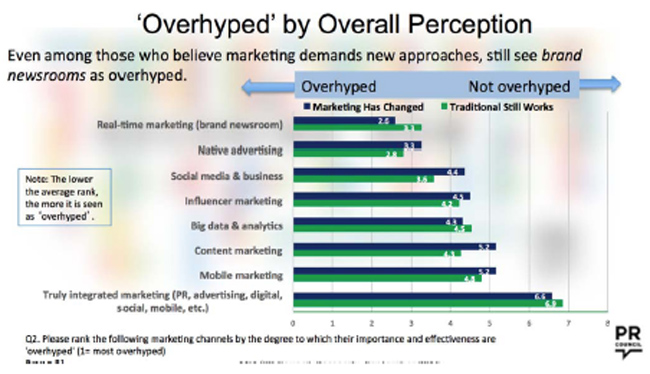 But they did not dismiss content marketing entirely. It came in a distant second in terms of strategic priorities with 27 percent naming it a top priority while 13 percent ranked it No. 2.

Kathy Cripps, president of the PR Council, said in a news release that the problem for both media newsrooms and corporate brand newsrooms is “maintaining a high-volume stream of relevant content over a long time.” 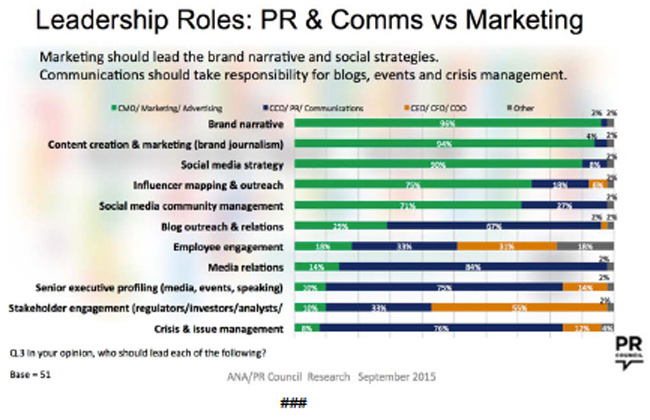 “The marketers answering this survey left no doubt as to their view that they should own most [disciplines] and said public relations should only lead media and blogger relations, crisis management, and building executives’ public profiles,” the study said. “They felt advertising and marketing should lead on brand narrative, content, social media strategy and influencer marketing.”

Influencer marketing, which is still in just the top of the second inning, is also sparking a schism between PR and marketing and advertising executives.

Brian Solis, principal analyst at the Altimeter Group and author of X: Where Experience Meets Design, said in the PR Council’s a release that advertisers and public relations professionals interpret the very notion of influencer marketing differently.

“This is the key difference between advertising and public relations,” he said. “Advertising will find a few top celebs, with some of them being Internet famous, to become part of a campaigns. PR on the other hand, will find said influencers and nurture longer- term relationships that keep the brand relevant now and in the long term.”