Politicians are like businesspeople, except instead of selling ideas to investors and consumers, politicians sell themselves to endorsers and voters. Donald Trump, above all other candidates in the 2016 presidential field, understands how to sell his personality, using television appearances as a primary source of promotion.

By hosting NBC’s Saturday Night Live last weekend Trump cashed in on his celebrity brand, making a case for himself as a populist anti-establishment Republican candidate who is making “America Great Again” through self-deprecation, bravado and entertainment.

Other candidates have been making similar appeals. Democrat frontrunner Hillary Clinton earlier this fall appeared on SNL, participating in a sketch and introducing Miley Cyrus, garnering headlines tinged with harmless controversy and attention. 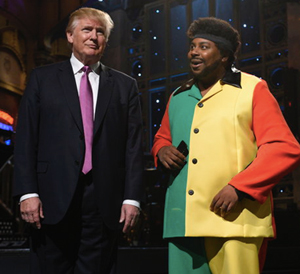 Trump, however, went the extra mile, agreeing to host the entire show. Ninety minutes of live television proves more daring for a candidate, and Trump had ample opportunities to make off-script gaffes or other slip-ups.

Trump did not go off script or make a gaffe but, unfortunately, the jokes didn’t land. The negative reviews were spurred not from the things Trump said, but rather the lame writing and the jokes that didn’t land.

The most telling sketch in this highly publicized SNL episode shows Trump tweeting commentary on an Italian dinner scene.

In the same way he chides and attacks rivals Marco Rubio, Ben Carson, Carly Fiorina or Jeb Bush, Trump attacks cast members like Kenan Thompson for having a name that sounds like “Kenyan,” which, while cringe-worthy, gets to the heart of Trump’s rise to the top of the polls.

To set himself apart from other candidates, Trump positions himself as jester and victor—or celebrity and politician—untouchable, but relatable and entertaining enough to appeal to a disenchanted Republican base.

And as with most publicity Trump garners, everybody wins.

Trump wins because his prime-time television stint went off with barely a hitch (not to mention additional attention from the boycotts preceding the events).

Rival Democrats, Republicans and media sources get more fodder for things they actively despise about Trump’s candidacy, and Trump supporters get to see a branded Trump make light of all the things everyone else despises.

The real winner, however, is Saturday Night Live, whose overnight rating of 6.6 was the highest rating the show had since 2012.

Ronn Torossian is CEO of 5wpr, which is headquartered in New York, with an office in Denver. He can be reached at rtorossian@5wpr.com