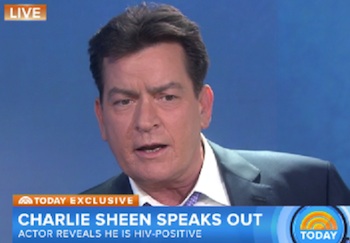 By revealing on NBC's “The Today Show” this morning that he is HIV-Positive, Charlie Sheen is sending a message to PR pros and communicators: When you want to go big, stick with the mainstream media.

Sheen told “Today” anchor Matt Lauer during a much-touted exclusive interview that he was speaking out now because of the millions of dollars he's paid in hush money to people who he claims have threatened to reveal his diagnosis, which he received "roughly four years ago,” according to USA Today.

“I've paid those people. Not that many, but enough to where it has depleted the future (of his fortune). … I don’t want to guess wrong, but enough (people) to bring it into the millions. What people forget is that’s money they're taking from my children,” Sheen said.

Sheen appeared on the “Today” set for a second interview with Lauer, alongside his personal physician, who said that the actor does not have AIDS and that he has "undetected viral loads.”

At the risk of being cynical, perhaps Sheen went public now because he’s been out of the limelight since his FX show "Anger Management" was canceled last year and is betting that he can become the public face for people living with HIV.

Another possibility is that one of the tabloids was about to go with the story that Sheen is HIV-positive and the actor wanted to get out in front of the story, own it and change the narrative. PR, at its most.

Regardless of his motivation, however, Sheen used a traditional marketing vehicle to get the word out.

Despite the increasing clout of social media channels—not to mention the growing influence of hipster Websites like BuzzFeed and Mashable—traditional channels such as "Today," which dates back to 1952, still pack an incredible punch.

Surely there were some ground rules to Sheen’s interview with Lauer.

But, at the same time, Sheen was fairly in control of the process, as opposed to calling a press conference, which could have gotten unwieldy and descended into a media circus.

For example, When LeBron James in 2014 told the world that he was returning to the Cleveland Cavaliers (after winning two championships with the Miami Heat) he did so via Sports Illustrated, rather than Deadspin, Bleacher Report or other sports websites.

When your company or client has a major message to deliver, aligning the announcement to a mainstream media outlet/popular program can help to eliminate any potential mystery or unforeseen circumstances.

With “Today” and similar media brands, you know what you’re getting into. You know it’s going to be a serious treatment, and you know that, despite the ongoing atomization of media, you’re getting a large audience to tune in.