Republican candidates will convene tonight for CNN’s presidential debates in Las Vegas, the GOP’s fifth this season, and the final for 2015. 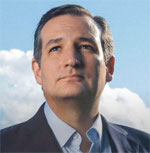 Tonight’s event also marks the first since the attacks in Paris and San Bernardino, and for this reason, terrorism will likely serve as a recurring theme, as will Donald Trump (yes, still), whose continued dominance in the polls and headlines — and his increasingly divisive language in wake of those aforementioned attacks — is sure to leave him on the offensive.

With only seven weeks to go before the Iowa caucuses, the stakes couldn’t be higher. Perhaps for no candidate is this more true than Senator Ted Cruz, however, whose recent surge in national and state polls will give him a rare chance to shine, and has most certainly landed him squarely in the crosshairs.

Cruz, who’s now Iowa front-runner and remains the only palpable threat to Trump's months-long reign in the national polls, has emerged as a sort of best-of-both worlds oddity in the conservative world, a favorite likely in a race dominated by unlikely favorites.

As a Senator, Cruz offers voters the reassurance that he knows how the system works, yet his fiery rhetoric regarding ISIS, man-made effects on climate change, and his position that only refugees of a Christian persuasion should be allowed into the country, have allowed him to retain an antiestablishment allure, forging an unlikely fraternity among fringe conservatives.

Moreover, his religious convictions and social positions on issues such as same-sex marriage — and a hardline, no-exceptions stance on abortion — has made him a likely first-choice among evangelicals, an influential and sizable voter demographic whose support has continuously eluded Trump.

Cruz also recently upped his credibility with coveted endorsements this week from the National Organization for Marriage, as well as from conservative activist Richard Viguerie. Add these high profile endorsements to a network of wealthy donors, a groundswell of grass-roots support, and Cruz is beginning to take on the profile of a contender.

Last week, Clinton campaign chairman John Podesta, speaking at a private fundraising event in Berkeley, allegedly told the crowd that Cruz would be the likely nominee.

At this point in the race, attacks are likely to begin playing a more pronounced role. Trump, who remains the GOP front-runner, has predictably started early in his derision of Cruz, referring to him “a maniac" during a December 13 Fox News Sunday interview, and questioning whether the senator's "temperament" and “judgment” make him a likely fit for the presidency.

Those comments were even repudiated by Rush Limbaugh, who went on to say that a "genuine conservative" wouldn't attack Cruz in this manner.

In the hours before the debate, Trump seemed to switch gears, logging on to Twitter to reignite his feud with Fox News Host Megyn Kelly, ranting that Kelly is "the most overrated anchor" at the network, and that she’s "unable to figure out the difference between me and Cruz" in recent polls.