To paraphrase John F. Kennedy in his inaugural address, "let the word go forth that the torch has been passed to a new generation." That generation is the third generation of the Kennedy family and the metaphorical torch is being used to illuminate and scorch them. 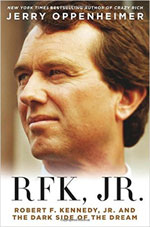 The unspeakable tragedies that have befallen the Kennedys have provided authors with an endless supply of material. The third generation, which includes the children of the late Sen. Robert F. Kennedy is now open for scrutiny.

Journalist Jerry Oppenheimer’s new biography RFK Jr.: Robert F. Kennedy Jr. and the Dark Side of the Dream [St. Martin’s Press] shreds the image of Camelot and gives the reader an unflinching look at the unsavory side of life in the Kennedy family that runs counter to their crafted public image.

Oppenheimer explored Ethel Kennedy’s political ambition and relationship with her children in 1994’s The Other Mrs. Kennedy.

When he was young, RFK Jr. formed a gang with the menacing name, the Hyannisport Terrors. His idea of fun was for a friend to pretend to be hit by a passing motorist. Young Bobby would yell at the already shocked driver “You killed a Kennedy!”

Drawing on interviews with dozens of classmates, Robert Kennedy, Jr. was a frequent user of marijuana. A lonely young man, he often turned to animals for company. At boarding school he turned to falconry as a hobby.

Classmates recall that Ethel Kennedy only ever came to his boarding school to enroll him. All matters concerning young Robert’s schooling were referred to family friend Le Moyne “Lem” Billings, a closeted gay man who had been a prep school classmate of John F. Kennedy. Robert Kennedy, Jr. despite being expelled from two elite boarding schools, was admitted to Harvard, supposedly by merely writing his name on the application. After graduation, he had his first taste of fame.

Lem Billings, who idolized John F. Kennedy, impressed upon young Bobby that his uncle first achieved national prominence with the publication of his Harvard thesis by a major New York publisher. Billings encouraged Bobby to go the same route.

RFK Jr. wrote his thesis on Judge Frank Johnson, a liberal federal judge who made his mark on civil rights cases. The Kennedy name made it very enticing for a New York publisher to acquire the rights to his thesis and get it on the market. The reviews from The Washington Post, The New York Times and The Boston Globe were dismal. He was given many opportunities to appear on television. He complained to People magazine that his name kept him from getting its message out. RFK Jr. thought that having a published book would help him in getting a Rhodes scholarship. He applied, but was rejected.

Oppenheimer, like nearly every recent Kennedy biographer, cannot resist repeating the rumor that Bobby and Jack Kennedy each had an affair with Marilyn Monroe. He eagerly puts that on page five.

The book also could have achieved more balance by giving closer examination to his experience as an environmental lawyer.

Overall, RFK, Jr. and the Dark Side of the Dream will titillate the reader and give a sense of heartbreak. As readers explore his life, and his relationships, they will wonder what comes next.

After all of his family’s tragedies, that occurred before and after he was born, readers will wonder where the support was during his life and who is responsible for his demons.