The 2013 State of the News Media report by the Pew Research Center's Project for Excellence in Journalism revealed that the news industry has shrunk 30 percent since 2000 and continues to decline. In sharp contrast to that news, a New York Times feature May 27 revealed that Al Jazeera America is in mass hiring and expansion mode.

As new Al Jazeera employee (former CNN anchor) Ali Velshi stated, "This is the first big journalism hiring binge that anyone’s been on for a long time." 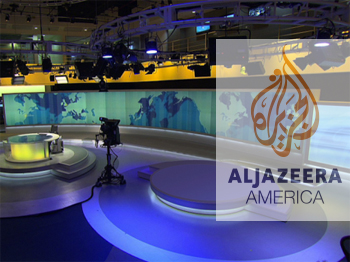 In an era in which nearly all others in the media world are firing, Al Jazeera America is hiring up to 800 people, has taken the studio space at the Newseum in Washington, D.C. which was formerly occupied by ABC's "This Week" program, and plan to open more than 12 bureaus throughout the U.S.

Al Jazeera, which is owned by Qatar's Kingdom, one of the richest countries in the world with seemingly endless oil and gas reserves indeed, financial considerations are less of a concern.

When Al Jazeera was founded they received a $147 million subsidy from the Qatari government and continue to receive $100 million annually in Qatari subsidies according to U.S. Congressional reports.

One wonders how much and how widely budget cuts have affected media viewership?

For example, Nielsen Reports say that in the last quarter 18-24 year-olds watched a weekly average of about 23 and a quarter hours of traditional TV in Q4 2012, 2 hours and 20 minutes less than they did in Q4 2011. Budget cuts, or social media, who knows?

Ad revenues largely fell for TV stations, and today reporters and editors are universally understaffed at TV networks so relationships are hard to develop.

Reporters across the board have very limited budgets – will that change if making money isn’t a concern like at Al Jazeera? Will pros at PR Agencies like 5WPR actually be able to invest time again in long-standing relationships? Perhaps there will be less turnover at Al-Jazeera if indeed they can overpay reporters to ensure they don’t leave?

Indeed, for many of us in the PR world who are used to commiserating with our media contacts about the dire state of the media industry the last few years (most recently ESPN announced up to 400 layoffs), there is a new sheriff in town.

Qatar -- Al Jazeera -- has no budget concerns and indeed will be a tremendously important media outlet for all of us in the PR business to have strong relationships with as the news business continues to evolve.

Ronn Torossian founded 5WPR, and is a finalist for PR Executive of the Year 2013 in the American Business Awards. His book, "For Immediate Release," is a best-selling Public Relations book.