The day after we ran a story (May 30) on stockholder activists complaining about high executive pay and an entrenched board at Omnicom, Bolt Insurance circulated a table of the 15 highest paid CEOs that put OMC's John Wren in 11th position with total pay of $42.6 million in 2012.

Our addition is that Wren's total pay was closer to $50M.

The 2013 Notice says BlackRock, the investment management firm with a market cap of $47 billion, now owns 13,433,977 shares (5.1%) in OMC, becoming the second largest investor after the 28,630,083 shares (10.9%) held by Mass. Financial Services Co. A footnote says BlackRock purchased the stock "in the ordinary course of business" and it "is not held for the purpose of changing or influencing control of OMC."

The Bolt report was sent May 31 by this reporter to Joanne Trout, VP of corporate communications of OMC, but no comment has been received. Bolt, based in Farmington, Conn., started as a service for small businesses but now provides general insurance advice.


Wren, according to Bolt, was paid more than No. 12 on the list, Jamie Dimon of JPMorgan, who only drew down $41.9M.
Dimon heads a company with $108 billion in revenue while OMC only generated $14.2B.

Other companies on the list had far higher sales than OMC.

Highest paid exec John Hammergren of McKesson hauled in $131M but headed a company with $112B in revenue.
David Cote of Honeywell earned $55.7M but while his company took in $33.6B in sales.

George Paz of Express Scripts was paid $51.5M for heading company with $93.8B in sales.

Calculating executive pay has attracted reform efforts by the government since so many elements are involved. The numerous pay schemes at OMC take up 26 pages in the proxy statement and include, besides the PRSUs, base salary, annual performance-based compensation awards, incentive bonus plan and the “Senior Executive Restrictive Covenant and Retention Plan” (SERCR) that provides pay for 15 years following voluntary termination. No benefits are provided if an executive is terminated for cause.

Bolt, in highlighting CEO pay, has latched onto one of the hot button issues of the day—income disparity. 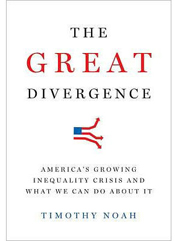 Those in the top one percent of income doubled their share of the nation’s collective income from about 10% to about 20% from 1979 to 2009, said an article in the New York Times May 19 by Timothy Noah, author of The Great Divergence: America’s Growing Inequality Crisis and What We Can Do About It.

Since 2009, he wrote, the one-percenters have had an 11% rise in income while the 99-percenters saw their income fall slightly. Hurting lower income people is that unions now only enroll 7% of the private sector labor force vs. nearly 40% 60 years ago.

Minow Not Involved in OMC Criticism

Nell Minow, a founder of GMI Ratings, a merger of the Corporate Library that she co-founded, Governance Metrics International, and Audit Integrity, said she was not aware that activist John Chevedden included criticism of Omnicom by GMI that was carried by the proxy for the 2013 annual meeting of OMC.

The Chevedden proposal, which was defeated, noted that GMI had given OMC a “D” since 2005 on governance practices, executive pay and director qualifications.

GMI's research, according to its website, is provided for the exclusive use of client companies. Its board includes Gavin Anderson, who headed Gavin Anderson & Co., an OMC PR firm. It listed 14 offices in the 2006 O’Dwyer’s Directory of PR Firms. Anderson left the firm several years ago.


Minow, daughter of former FCC Commissioner Newton Minow, who said on May 9, 1961 that TV was a "vast wasteland," has been a critic of executive pay levels and ineffective boards for many years.

Speaking to the Gel "leaders and thinkers" conference May 8, 2011, she said there are too many "consensus builders" on boards who are dominated by "dynamic CEOs who are used to having everyone say 'yes.'" She called this a "recipe for catastrophe."

Her explanation of the 2008 financial meltdown to Gel was that "Everyone at every stage of the process got paid by the quantity of the transactions, not the quality—mortgage originators, regulators and ratings agencies."

Bloomberg reported May 30 that directors of the Standard & Poor’s 500 companies were paid an average of $251,000 in 2012, the sixth straight year of increases.

The Chevedden proposal says too many OMC directors have served too long, which may "therefore hinder their ability to provide effective oversight."